i Apr 3rd w No Comments x by Afri

A short film made by Dave Donnellan on behalf of Afri to highlight the volume of military traffic through Shannon and the implications this has for Ireland as a supposedly “neutral” country. Afri board member, John Maguire, describes Shannon: “as much a war port as an airport”.

i Apr 2nd w No Comments x by Afri

There was a dramatic photo-call at Dáil Éireann on Easter Monday highlighting opposition to what the justice and peace organisation Afri is calling “the shameful handing over of Shannon Airport by the Irish Government to the US war machine”.  Actors Donal O’Kelly, Raymond Keane and Dylan Tighe – dressed as a US soldier, a Guantanamo detainee and an Irish politician – marked the tenth anniversary of the invasion of Iraq by dramatically enacting outside the Dáil what Afri coordinator Joe Murray calls “Ireland’s fawning welcome to illegal warriors and its cold indifference to illegal rendition for torture”. 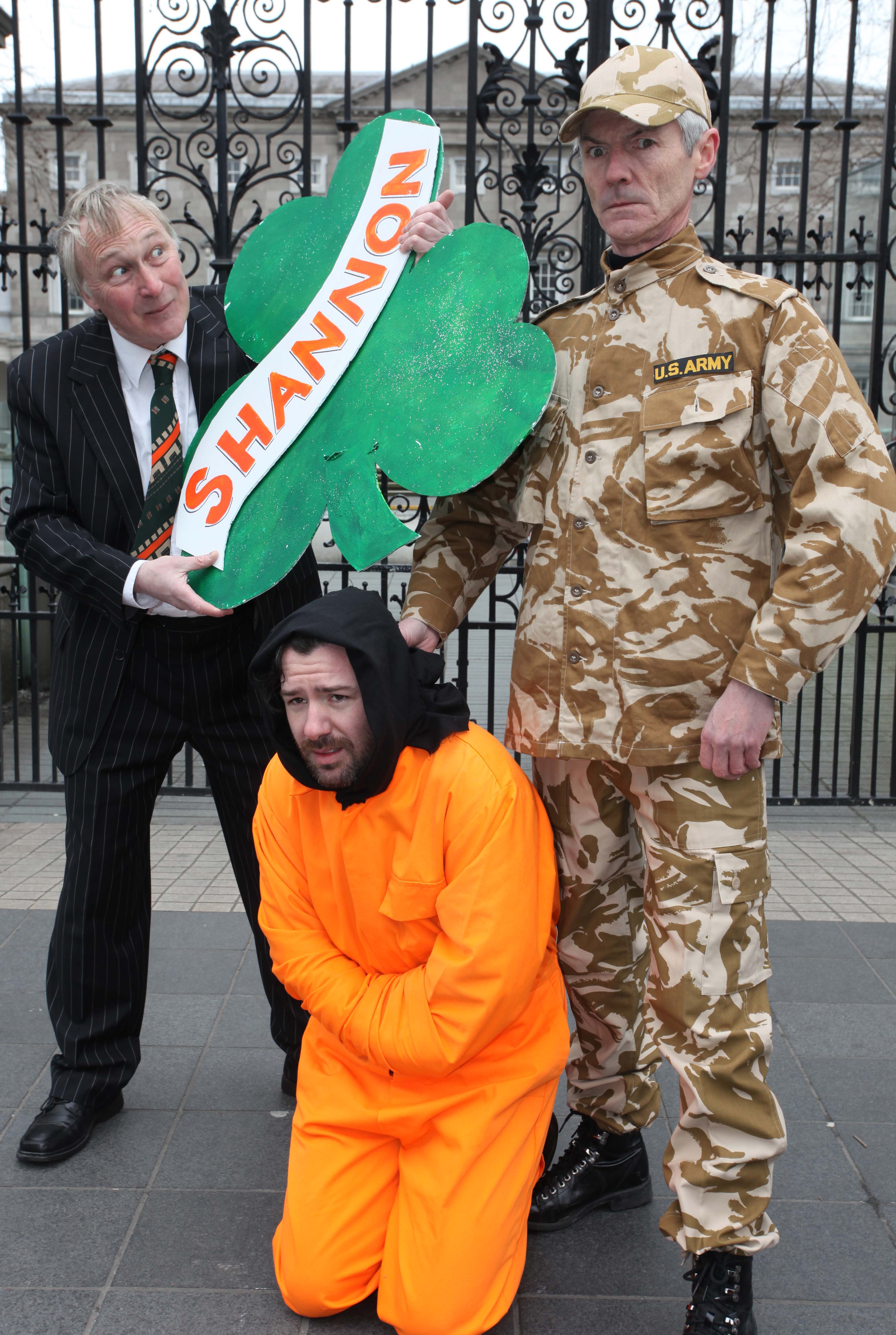 From left to right: Donal O’Kelly as an Irish politician, Dylan Tighe as a Guantanamo Bay prisoner and Raymond Keane as a US marine in a protest action to highlight the use of Shannon airport by the US military on the 10th anniversary of the Iraq war. Photo: Derek Speirs

The actors dramatised how ‘official Ireland’ warmly embraces the US military, while turning a blind eye to the kidnap and torture of civilians.  “This may seem like a ‘stunt’”, said Mr Murray, “but its aim is deadly serious – to use the medium of drama to highlight what standard media coverage of the issue now routinely ignores, namely that we have made ourselves complicit in war crimes and the worst violations of human rights”.

Note: Afri Statement on the Tenth Anniversary of the Iraq War

“As we embark on Ireland’s own decade of remembrance it is crucial to reflect on the last decade and more of complicity in disastrous and immoral onslaughts on Afghanistan and Iraq.  Even if these wars were not illegal – lacking UN authorisation – they have proved catastrophic for the populations and environments involved and in their bitter legacy of resentment and enmity.  As a Security Council member in 2001-02 Ireland failed utterly to express our Constitution’s commitment to  “the pacific settlement of international disputes” (Art. 29.2), thus abetting the undermining of UN authority on foot of unfounded claims about weapons of mass destruction.  Our failure to confront the so-called War on Terror is also revealed in the indifference of successive governments, and the Garda, to the evidence of Ireland’s involvement with illegal rendition flights for torture.

This complicity has been detailed by Shannonwatch, and criticised by the Council of Europe, Amnesty International and, this year, the US-based Open Society Justice Initiative.  The call from our own Human Rights Council in 2007 for an effective inspection regime for all relevant flights has been met with callous indifference.  The new Chief Executive of Shannon Airport has recently declared that military traffic “has been in the DNA of Shannon for many years… [;] it’s lucrative and we are certainly going to go after it as much as possible.”  This obscene metaphor blithely ignores the real genetic legacy of war, such as Agent Orange in Vietnam.  And no-one checks whether equally appalling weaponry, such as depleted uranium, currently flows through Shannon’s bloodstream.

Official Ireland’s line is ‘whatever you do, say nothing, hear nothing, see nothing.’  But in the real world, DNA is a complex of different strands.  Ireland’s ‘DNA’ contains a vital strand of peacekeeping, non-aggression and friendly co-operation.  This has been shamefully suppressed by our political establishment and police authorities, all-too-conscious of their imagined role among the high and mighty, all-too-contemptuous of basic human rights at home and abroad.  Our conniving in illegal aggression and the denial of human rights is a lamentable stain on Ireland’s role in world affairs.  The continuing pressure for further aggression in Iran and elsewhere makes it urgent that we as Irish citizens hold our government to account, not merely to correct a vast historic injustice but to prevent even more death, destruction and denial in the future.”

Silence on our supporting role in rendition is deafening

Anne Marie Hourihane raises challenging questions about Ireland’s complicity in extraordinary rendition and explores why there has been silence in relation to it.  To read the article: http://www.irishtimes.com/newspaper/opinion/2013/0211/1224329907298.html

Is Collusion with Torture and Killing Part of Shannon’s DNA?

i Jan 24th w No Comments x by Afri 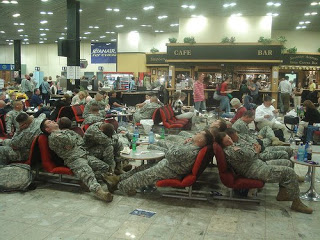 Afri coordinator Joe Murray condemned Ms Hynes’ failure to take any account of the moral and ethical challenges such ‘lucrative’ business poses. He cited evidence from Amnesty International showing 50 landings at Shannon of aircraft involved in rendition/torture up until 2005, with further such cases since recorded by the NGO Shannonwatch. “Is Ms Hynes saying that collusion with torture is part of Shannon’s DNA?” Mr Murray asked. END_OF_DOCUMENT_TOKEN_TO_BE_REPLACED

US Veterans for Peace To Attend Shannon Vigil 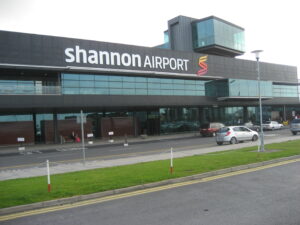 Members of the U.S. organization Veterans For Peace will take part in a vigil at Shannon Airport action on Sunday next, November 13th, at 2 pm. The vigil is organised by Shannonwatch to demand an end to the ongoing US military use of the airport, and to express opposition to the ongoing US occupation of Afghanistan. It will also call for action to be taken against landing US aircraft that are involved in renditions, illegal assassinations and other human rights abuse. END_OF_DOCUMENT_TOKEN_TO_BE_REPLACED

i Aug 18th w No Comments x by Afri

The US Department of Defence has confirmed that 12,154 military flights have gone through Shannon between 2001 and the start of 2011. These took 2,030,925 armed troops and 8,487 tonnes of military cargo through what is supposed to be a civilian airport.

The figures which were published by RTE based on a freedom of information request to the US authorities are in line with military flight data recorded and published by Shannonwatch. Both show that on average more than 3 US military flights pass through Shannon every day. Most of these are troop carriers operated by Omni Air International. They use an ageing fleet of DC-10’s, many of which are more than 25 years old. END_OF_DOCUMENT_TOKEN_TO_BE_REPLACED

i May 20th w No Comments x by Afri

The first was the annual Famine Walk from Doolough to Louisburgh, on Saturday 21st, commemorating the death of Irish people during the ‘great famine’ of the nineteenth century and highlighting the reality of hunger and food insecurity in the world today, the causes of which include war and obscene levels of military spending. This year the Famine Walk  focused especially on the question of food sovereignty, including the threats to it from increasing corporate control of the food chain and the treatment of food as just another commodity to be bought and sold. The theme of corporate power also dominated at the second event, a public meeting in Erris on Sunday 22nd, where activists from India exchanged their stories of oppression by multinational companies (especially Union Carbide and its devastation of Bhopal) with the tales of local campaigners against Shell’s unwanted and dangerous Corrib Gas pipeline. END_OF_DOCUMENT_TOKEN_TO_BE_REPLACED

No You Can’t: Why Shannon Airport should be Open to Business but Closed to War

Former Staff Sergeant Jimmy Massey will be among the speakers at a public meeting entitled ‘Why Shannon Airport should be Open to Business but Closed to War’ organised by the justice and peace organisation Afri in the Park Inn Shannon Airport Hotel on Saturday, May 1st beginning at 2.30pm. John Lannon of Shannonwatch will also speak and the event will include a film presentation by Afri board member and film maker Muireann de Barra. 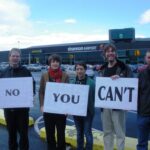 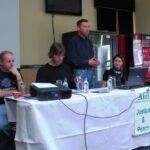 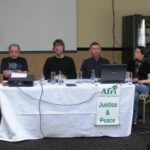 END_OF_DOCUMENT_TOKEN_TO_BE_REPLACED

i Nov 16th w No Comments x by Afri

The recent Bord Pleanala ruling in favour of local residents in the ongoing Corrib Gas pipeline dispute highlights the need for new avenues of civic participation, according to a national peace and justice NGO, whose international patron is the distinguished Peace Prize winner Archbishop Desmond Tutu. Afri Coordinator Joe Murray says that the ruling vindicates the struggle of the local community over the past 10 years but also brings into question why they have had to endure intimidation, jail, beatings and media demonization for much of that time.

“The Corrib gas dispute in many ways tells the story of modern Ireland, where big business has colluded with soft democracy, trampling the rights of ordinary Irish citizens to fair and just treatment. The result has been an erosion of civil liberties and the emergence of corporate rule where multinationals appear to have greater rights than Irish citizens,” according to Mr. Murray. END_OF_DOCUMENT_TOKEN_TO_BE_REPLACED

This period – 1997-2007 – has seen the increasing militarisation of Ireland’s foreign and defence policy. The report claims this is most starkly evidenced in the almost daily use of Shannon airport in support of the illegal United States-led wars on Iraq and Afghanistan, but also in the inadequacy of the Government’s response to evidence that Shannon has been used as part of a US kidnapping and torture circuit. The ongoing integration of the Irish Defence Forces into non-UN military structures such as NATO’s PfP and the EU’s Battlegroups signals, the report argues, a departure from a truly internationalist and peace-promoting vision. Finally, the report documents the Government’s lack of urgency in at least regulating Ireland’s significant arms trade. END_OF_DOCUMENT_TOKEN_TO_BE_REPLACED