A series of memorable events will take place in Mayo on May 20th and 21st as part of a Famine Walk week-end, organised by Afri.

On Friday, May 20th the 3rd annual ‘Food Sovereignty Assembly’, bringing together people involved in many aspects of growing, distributing and cooking food, will take place in the Town Hall in Westport from 2pm to 6pm.

On Saturday May 21st the Doolough Famine Walk will take on added significance, one hundred years on from the 1916 Rising. Remembering and commemorating acts of resistance in Ireland and abroad have been key themes of the Walk since its inception. END_OF_DOCUMENT_TOKEN_TO_BE_REPLACED 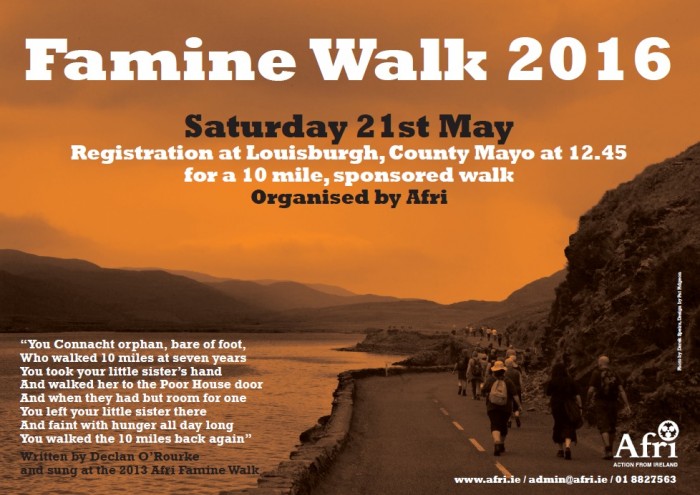 END_OF_DOCUMENT_TOKEN_TO_BE_REPLACED

Water as a Human Right in El Salvador

i Mar 6th w No Comments x by Afri

Afri Co-ordinator, Joe Murray, visited El Salvador and Guatemala in January 2007 to meet some of the amazing groups and individuals who are tackling the many causes of inequality and injustice there.

During his visit to El Salvador he came into contact with the Programme of Human Promotion and Sustainable Development (PHPSD) in Santa Rosa de Lima: among other things, they are addressing the critical issue of water, which has been a major cause of premature death and serious illness in the area.

In the majority of rural communities in El Salvador, people often have to walk miles to access contaminated streams to fetch water for domestic use. During the dry season the problem is exacerbated by deforestation causing the streams and the wells to dry up.