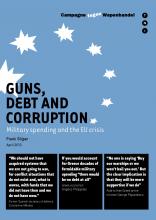 This period – 1997-2007 – has seen the increasing militarisation of Ireland’s foreign and defence policy. The report claims this is most starkly evidenced in the almost daily use of Shannon airport in support of the illegal United States-led wars on Iraq and Afghanistan, but also in the inadequacy of the Government’s response to evidence that Shannon has been used as part of a US kidnapping and torture circuit. The ongoing integration of the Irish Defence Forces into non-UN military structures such as NATO’s PfP and the EU’s Battlegroups signals, the report argues, a departure from a truly internationalist and peace-promoting vision. Finally, the report documents the Government’s lack of urgency in at least regulating Ireland’s significant arms trade. END_OF_DOCUMENT_TOKEN_TO_BE_REPLACED