Dublin Events Marking the 20th Anniversary Of Killing Of Ogoni 9 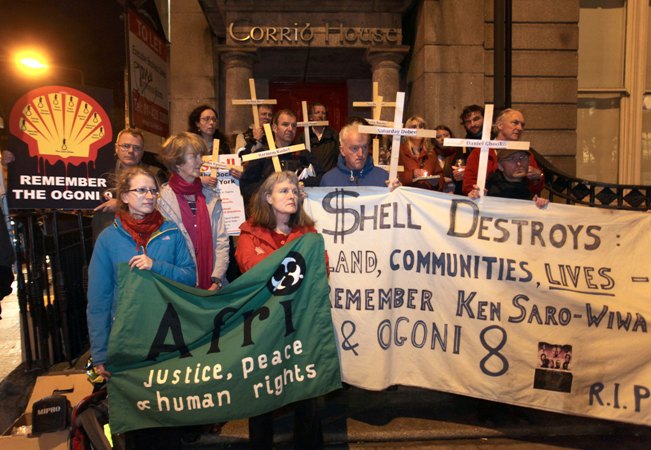 Vigil outside Shell Headquarters on the 20th anniversary of the execution of Ken Saro-Wiwa and the Ogoni 9. Photo: Derek Speirs

Love Leitrim delegation asks for a licence not to frack Ireland

i Feb 28th w No Comments x by Afri

Thursday Feb 28th is a date that could be etched in Irish memory. It is the deadline date gas companies have to submit applications for an exploration licence. Currently two of these companies have applied. If they are granted rights for an exploration license, many commentators advise that this would pave the way for the introduction of hydraulic fracturing into Ireland. The nature of the licensing terms are difficult to get out of. Companies also gain the opportunity to build their fracking infrastructure for this controversial industry.

To mark this date, a delegation from Love Leitrim are coming to the Dail to ask the ministers instead, to make a positive stance on behalf of their people and grant a licence not to frack Ireland. They will be outside the gates from Midday to 3pm. The Frack Free Ireland campaign has been rolled out and people have been asked to send in their licence request for their right to have unpolluted water, their right to live in a rural area, right to maintain and safeguard indigenous industry, and fundamentally the right to their health and the health of future generations. The campaign has captured the imagination of the public and high profile artists with backing of Christy Moore, Steve Wickham, and Glen Hansard who have pledged their support. Eleanor Shanley of De Danann fame, Rossa O Snodaigh Of Kila and Leitrim GAA stars are others who have signed the Application not to frack Ireland.

At the moment the decision currently lies with the government whether to frack Ireland or not. While research has been commissioned it does not consider public health and does not have public health expertise on the steering group guiding it.

The brainchild of Irish tourist provider Nuala Mc Nulty, the Application for a frack free Ireland pleads with the government to make a powerful positive choice on behalf of its people and immediately halt any further licences.
Nuala says
“Throughout this process people have been forgotten about. We want to put people back into the centre of decision making. It’s as simple as this. We are asking the Irish government, Are you with your people or not? We need them to show us they are with us by halting any further licenses’

Love Leitrim wants Feb 28th to be the beginning of a show of solidarity by the government to its people at home and abroad, and that date to be remembered for all the right reasons.

or for further background on the campaign

If You Didn’t Laugh…

i May 12th w No Comments x by Afri

A Night of Readings and Music

Expenditures (including radio advertisement on RTE and venue hire) €2,439