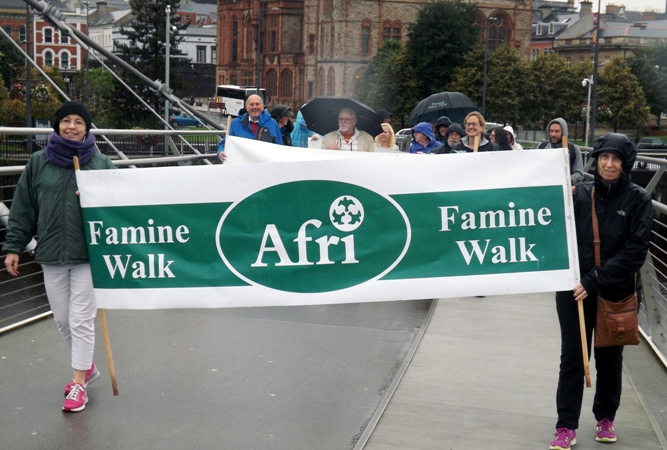 Famine walk leader, Linda Ervine, right, holding the Afri banner crossing over the Peace Bridge in Derry with the Guildhall in the background. Nuala Crilly of St Columb’s Park House is holding the banner on the left. Photo: Rob Fairmichael

A small but enthusiastic crowd gathered on the Guildhall steps in Derry on a wet weekday afternoon, 21st September 2016 (International Day of Peace), for a famine walk. They were welcomed by Mayor Hilary McClintock.  From the Guildhall the walk went to the former Poor House at Glendermott Road and then on to St Columb’s Park House for refreshments and chat. As a regional and transport hub, Derry would have received many starving incomers during the Great Famine, presenting themselves at the Poor House door where the famine walk stopped and remembered those who suffered and died.

Organised by Waylon Gary White Deer for Afri, with Concern backing, the walk leader was Linda Ervine of the Turas Irish language project at East Belfast Mission, some of whose members came on the walk. Linda Ervine drew attention to the fact that the Protestant community, and she is from a Presbyterian background, also suffered in An Gorta Mór, but that history had been hidden. Other speakers included Waylon Gary White Deer, Rob Fairmichael for Afri, and Helen Henderson of St Columb’s Park House, and sean nós singer Noeleen Ní Cholla performed a couple of songs including Éirigh suas a stóirín.

This Walk was part of Afri’s Famine Landscape Project and was organised in partnership with St. Columb’s Park House.