i Dec 10th w No Comments x by Afri

Abjata Khalif, from Afri’s partner organisation, the Kenya Pastoralist Journalist Network, writes about the introduction of solar powered lamps to assist in the work of midwives in Sankuri in Kenya. 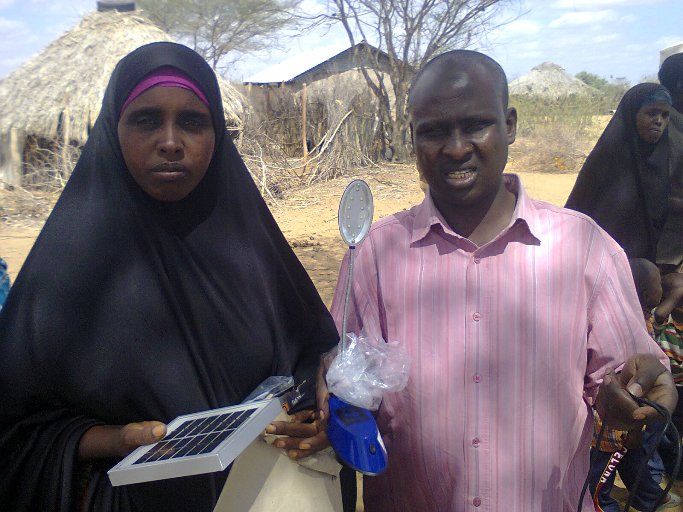 Sankuri village is 300 kilometres from main Garissa town and the area has poor communication and transport network forcing residents to use donkey carts and camel to ferry patients to hospitals. The journey takes seven days to main Garissa town and most patients die on the way before receiving medical attention.

The mode of transport and duration it takes to main hospital is not favourable to women experiencing labour or are ready to deliver. The seven days journey is a recipe for obstructed delivery that causes fistula and mother and child death.

But Women in Sankuri have their set of rules and guided by cultural beliefs that traditional birth attendant has the prowess to offer good abdominal palpation , offering ‘’traditional ante natal care and safe delivery services without hassle of going to Garissa hospital and in hand of midwives serving many women at ago.

As the scorching sun set in the horizon, group of eight heavily pregnant women walks into Hasna expansive compound housing her ‘’delivery room’’, consultation room and traditional training room where she educate both pregnant and other women on behavioural change and family planning.

Her traditional facility is built with sticks and grass and the only source of water is from shallow well and no running electricity to light the facility that offered safe deliveries for last twenty five years.

With no electricity, Hasna uses kerosene lamp at night to attend to emergency services and wading through vegetation and village path oblivious of many dangers like snake bites, attack by hyenas and stepping on thorn trees used for fencing.

‘’ For twenty five years I have been using kerosene lamp and sometime bright lights from the moon. I have been bitten three times by snakes and that affected my work and inconveniencing many pregnant women in Sankuri village. The kerosene lamp had its health problem both to me and mother with her new born baby. I have contracted respiratory infection on various occasions and also the use of moon light is quite tricky as I have to conduct deliveries in open space. I use moon light only when kerosene is out of stock or when I contract respiratory sickness. ‘’ Averred Hasna.

But Hasna and other traditional birth attendants have less to worry after they received solar led lamps that enable them to conduct deliveries with bright light from portable lamps. The solar led lamps uses solar energy which is abundant in arid land of northern Kenya and it comes with solar panel connected to the lamp.

The solar panel is directed at the scorching sun and its take some five hours to take full charge which enables it to be used for 12 hours.

The lamps is only used by the attendants to attend to emergency at night hours and also using it during women education session where each traditional attendant congregate more than twenty pregnant women at her compound to go through family planning and behavioural change education.

“Solar lamp has made my deliveries and women education work simple as I charge it during the day and start using it at night. I have used the solar lamp given to me to attend to 185 deliveries in Sankuri village and offering women education without cost implication. In the past we use to worry on the cost of the kerosene but now everything is in front of our door.” Hasna elaborated.

“I use to charge some 425 Kenya shillings for every single delivery due to high cost incurred in buying kerosene which is procured from Garissa some 300 kilometres from our Sankuri village. But with introduction of solar led lamp I charge only 255 Kenya shillings [equivalent to 3 USD] and 185 women have enjoyed the reduced cost and others in my village.” Said Hasna, the birth attendant.

Pajan Kenya, the organisation educating traditional birth attendant on use of solar lamps termed the project as using green energy in empowering local and grassroots women in contributing to Millennium Development Goal 5 and curbing child mortality in remote areas with no health facilities.

With clean and permanent source of light, Hasna, the traditional attendant continues to receive pregnant women and others for consultation, deliveries and women education sessions. One of the groups comprising pregnant women led by Halima Bishar flocked the solar lamp powered delivery shelter and the attendant handled their cases separately and taking each one into her consultation room.

Halima, a 28 years old mother of two went into the consultation room and after undergoing observation she came out to join her colleagues. Halima gave birth to her two children in the same traditional facility.

Two thirds of Kenya’s maternal deaths are attributed to postpartum haemorrhage (severe loss of blood during or after labour), sepsis (bacterial infection in the blood), eclampsia (hypertension during pregnancy) or a ruptured uterus.

According to the last demographic health survey, released by the government, Kenya has one of the highest maternal death rates in the world at 448 per 100,000 live births with seventy percent of women in northern Kenya deliver under the care of traditional birth attendant while 30 percent give birth at hospital.

However Hasna boast that she has offered services for twenty five years and she never recorded any death due to delivery complication in her facility.

“I have offered services here in Sankuri village for twenty five years and I have not recorded any death. I understand my customers, their background and their pregnancy timetable. I have received training and equipment’s to make my work professional.” The attendant said that she received various skills that will enable her observe her client closely and arrange their referral if they show anaemic signs and also antepartum haemorrhage.

Ballooning maternal deaths and other challenges has forced health stakeholders to build capacity of traditional birth attendant in line with modern maternal standard and quality services delivery that will offer safe delivery at rural areas.