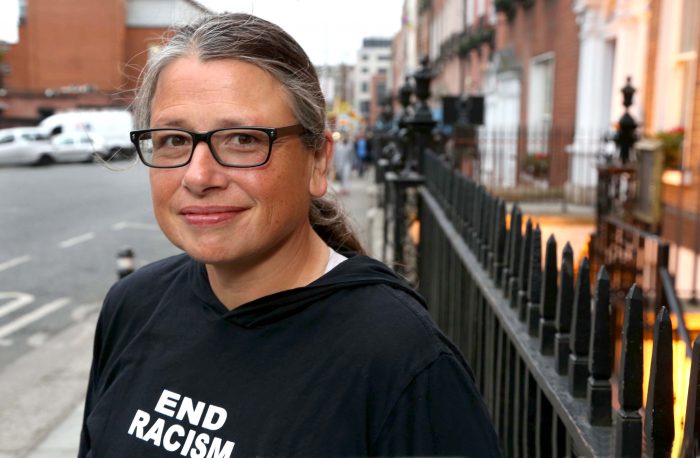 Chas Jewett, from the Cheyenne River Sioux Tribe, and Standing Rock Water protector, spoke in the Teacher’s Club on Monday evening at an event supported by Afri, Comhlamh, Feasta and Friends of the Earth.  This public meeting was part of a tour around Ireland visiting Cork, Galway, Cloughjordan, Leitrim and Dublin.  Chas is a tribal organiser who lives in Rapid City, South Dakota, and aims to encourage people to engage and mobilise.

Since 2016 the Standing Rock Reservation has been the scene of a protest against the Dakota Access Pipeline which aims to bring oil from Canada into the US through Native American lands over fears of contamination of drinking water supplies.  The existing Keystone 1 pipeline has leaked 26 times.

Chas spoke about the legacy issues of the 19th century treaties between the U.S. government and the First Nations people.  In 1873 General Custer found gold in the Black Hills which led to people being moved – without compensation – and separated into various different reservations, one of which is the Standing rock reservation.

The treatment of First Nations People by the US government has had a very detrimental effect on their culture, language and health – with issues such as a high suicide rate (seven times higher than national average), very high unemployment, mental health issues, sexual trauma as a result of institutional abuses, violence and alcoholism.   In addition, although Native Americans may own land they must seek permission from the ‘Indian agent’ should they wish to build on that land.  Up until 1978 it was illegal for native Americans to practice their own religion.

Some of the poorest people in the US live in South Dakota. Yet despite this they have been able to hear the earth’s cries and have been aware that the ‘soul sickness’ of consumerism is not what will make us happy – the earth has all that we need.  For the Lakota people one of the most important things is being a good relative – and part of that involves recognising that we are related to everything.  Every decision to be made should take into account the effect it will have on seven generations. 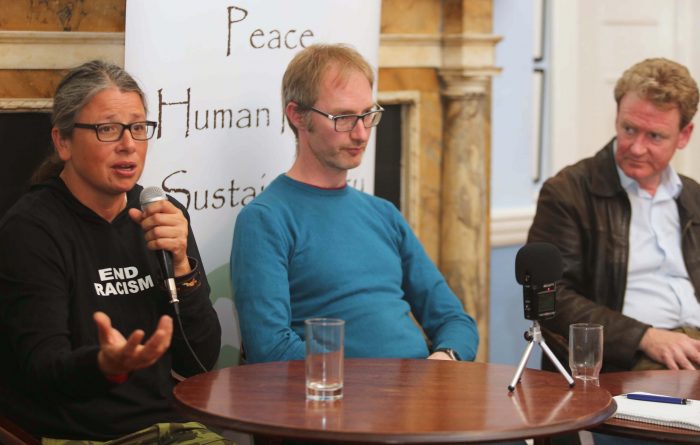 Chas Jewett (left) speaks at a public meeting in Dublin on Monday 26th June.
Also speaking at this event were Oisín Coghlan (Friends of the Earth – in middle) and Scott Coombs (Lover Leitrim – on right). Photo by Derek Speirs

Chas has been involved in the Rapid City Community Conversations which brings together white people and Indian people.  She believes this process is part of the solution.  There is an incredible amount of cognitive dissonance in the US – a lot of people do not actually know what has happened to the First Nation peoples.  She noted the irony that Mount Rushmore, a monument built by a bank in the Black hills – a place sacred to her people – has become a shrine to democracy.

The Standing Rock campaign has allowed Chas’ people reimagine the future and have pride in their culture.  For the first time they are all ‘in line’; they have never gathered together like that before.  Last week it was found out that the protesters were legally correct in objecting to the keystone XL pipeline – even though the industrial military complex was not.  They would like to move from being (what they are currently classified as) a “dependent sovereign nation” to an “independent sovereign nation”.  Chas stated she appreciated the work that others have been doing which helped make the Standing Rock campaign such a success, such as divestment and so on.  She concluded that if you want to know the health of an environment you should look at the indigenous people.

Chas Jewett was in Ireland, courtesy of Dr Mark Garavan, Feasta, to speak at “A Thinkery on Water, Anti-Privatisation Struggles and the Commons” in University College Cork, Friday 23rd June.