Save the Earth, Abolish War

i Jul 17th w Comments Off on Save the Earth, Abolish War x by Afri 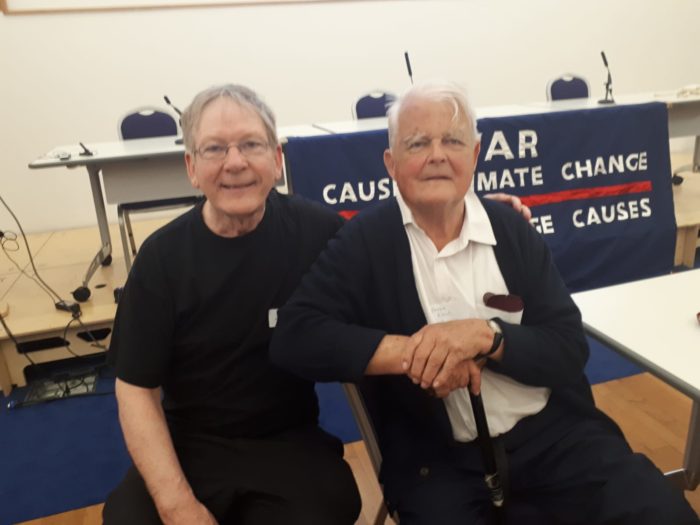 Joe Murray of Afri with Bruce Kent, President of the Movement for the Abolition of War, who celebrated his 90th birthday on the week before the conference!

Joe Murray recently attended a conference in London, organised by the Movement for the Abolition of War entitled ‘Save the Earth, Abolish War’. Below is a short report on the meeting.

Save the Earth, Abolish War

The first speaker was Peter van den Dungen of the International Network of Peace Museums, who referenced the title of a book he recently bought entitled ‘the end of the world generation’. He described as ‘diabolical’ and ‘the road to destruction’ the philosophy based on the theory ‘if you want peace, prepare for war’.  He argued for the abolition of war and rejected the notion that it was not achievable – in the same way as people in the past rejected the notion that slavery could not be abolished; that women should not have the vote; that child labour was acceptable and that the dreadful practise of duelling was an honourable pursuit.  Our ideas of right and wrong change, over time – and it is now well past time that the very idea of war was consigned to the dustbin of history.

The Second speaker was Dr Stuart Parkinson of Scientists for Global Responsibility, who outlined the impact of war and militarism on our Planet in clear and graphic terms.

B-2 long range bomber does 0.3 miles to the gallon  – 250 tonnes of C02e per ‘mission’3.2 million tonnes of CO2e emitted by UK military in one year  – higher than the carbon emissions from Iceland

The pentagon is the world’s largest Institutional consumer of petroleum.

War on terror has caused 3000 million tonnes of CO2e

Military responsible for at least 5 to 6% of emissions compared with cars which cause Cars 15%;

US negotiators successfully argued for military carbon emissions to be excluded from targets under the 1997 Kyoto Protocol (Clinton Administration) but they were included under Paris agreement.

Highlight the huge imbalance between military and climate spending

Shift towards plant –based farming and consumption