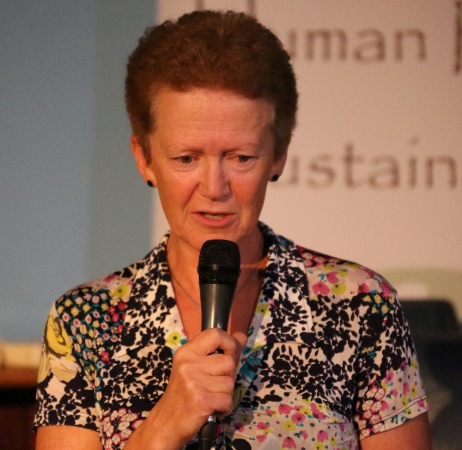 The first speaker was Nuala Kelly, whose talk drew on her extensive experience of supporting Irish prisoners in overseas jails. She recounted how she had at first been more aware of Giuseppe Conlon’s arrest back in 1975 than that of his son Gerry but how later, in her work with the Irish Council for Prisoners Overseas, she became involved in supporting Gerry and his family in their quest for justice. Nuala emphasised the impact on families when a person is imprisoned and the importance of offering support and working alongside families. She described how the campaign to free the Guildford Four, Maguire Seven and Birmingham Six started to gain momentum, with local groups little by little getting involved and taking their own solidarity initiatives, such as a women’s group organising street stalls in central Dublin. If we are going to build an effective campaign to free Chelsea, we need to find ways to engage as many people as possible as well as being mindful of the perspectives of both the prisoner and her family. 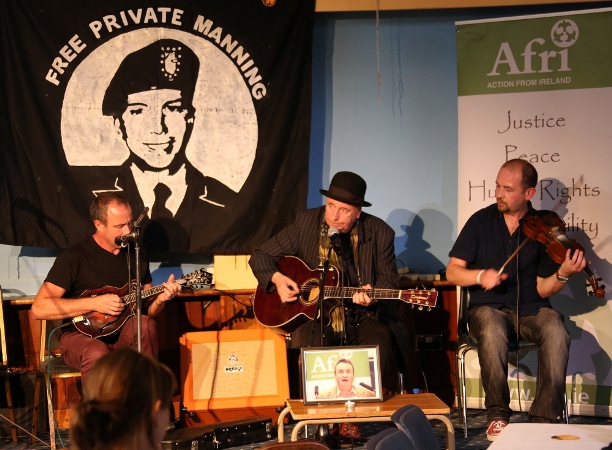 Joe Black, Simon Meyler and Des McGonigle continued the evening with powerful and moving songs including The Welcome about the rejection, discrimination and injustice experienced by Irish immigrants in England and another about Gerry’s father Giuseppe Conlon, written for the opening of Giuseppe Conlon Catholic Worker house in London. Later in the evening, Joe’s sisters Róisín and Crea Ryder joined the band, adding another dimension with their sweet harmonies.

On Wednesday night we’d had the privilege to attend, at Brian Fleming’s invitation, the première of his not-to-be-missed one man play A Sacrilegious Lesbian and Homosexual Parade (about the exclusion of LGBTQ groups from the main St. Patrick’s Day parade in New York and the St. Pat’s For All Parade in Queens that has been offering an inclusive alternative for the past 14 years).

After the play we’d met a friend of Brian’s, Aengus Carroll, who is based in the law school in University College Cork, a consultant in LGBTQ human rights with an interest in trans issues in the international arena. Aengus expressed his support for Chelsea, outlined his contact with organisations that may be able to help and promised to be in touch.

At Resisting Injustice, Brian gave a rendition of his extraordinary bodhrán piece The Day the Apaches Rode in to Vietnam, which has to be seen (and heard) to be believed. Based on the sounds of cowboy films and Apocalypse Now, this piece had been performed during January’s Truthfest in Pembrokeshire. Now Brian did it again for us, at Susan Manning’s special request.

There was more music from RoJ Whelan and Paul O’Toole including RoJ’s wonderful ballad I am Chelsea Manning, a favourite of Chelsea’s family.
Paul O’Toole spoke about how great it was to see everyone coming together to remember Gerry and in solidarity with Chelsea, but observed that a key person was missing from the gathering. Ciaron O’Reilly, responsible for bringing together so many of the people present and without whom none of this would likely be happening, is back home in Brisbane and conspicuous by his absence. Paul acknowledged Ciaron’s talent for ‘knitting people together’ into solidarity work and expressed the sentiment of many that such a gathering without him feels incomplete.

Sorcha, who shares Chelsea’s maternal family name of Fox and who was central to the success of our previous Welsh-Irish solidarity events, read a couple of her poems including one about Willie Corduff, one of the farmers who resisted Shell’s gas project at Rossport, whose parents had toiled to turn the bog into productive farmland, who was imprisoned for refusing to allow Shell on his land and was harassed for years including being beaten up by Shell security guards. 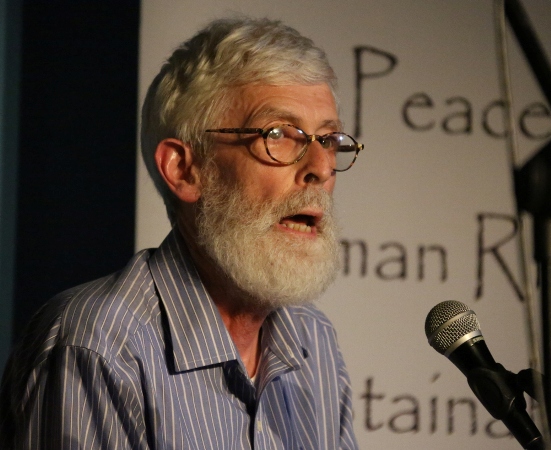 John Maguire, who has campaigned for years to stop the military use of Shannon airport, spoke a little about this then read his poem about the so-called ‘Great War’, dedicating it to Chelsea, before sharing an idea for a solidarity action for Chelsea Manning that everyone can be involved with. More on that soon…

Last up, Donal’s talented daughter Katie O’Kelly performed a truly wonderful and imaginative piece she had written for a recent Gaza solidarity event. Big thanks must also go to Donal’s other daughter Clara Purcell for her excellent work with Afri organising the evening.

Joe Murray closed the event, thanking everyone for coming along and sharing Gerry Conlon’s sister Ann’s wish that some of the donations collected at the meeting should be given to London Catholic Worker’s Giuseppe Conlon House in London. The house, co-founded by Ciaron O’Reilly and where he lived and worked until earlier this year, was named four years ago for Gerry and Ann’s father Giuseppe, one of the Maguire Seven who died an innocent man in a British jail in 1980 after also being framed in connection with the Guildford pub bombings. Members of Chelsea’s family visited Giuseppe Conlon House house on their way through London en route to the US to see Chelsea last February.