Reflections from the Food Sovereignty Assembly and Famine Walk 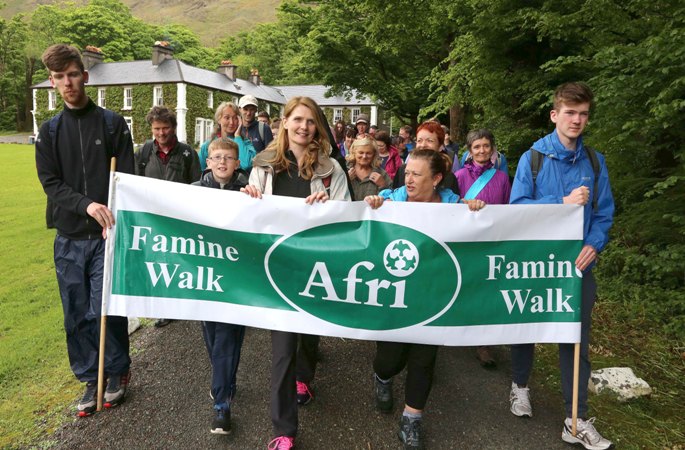 The 2016 Famine Walk began at Delphi Lodge, led by walk leaders Cathryn O’Reilly and Clare O’Grady Walshe (the other walk leader not present here is Rafeef Ziadah) among others. Photo by Derek Speirs

Around thirty people gathered for Afri’s 3rd annual food sovereignty assembly, which took place in the town hall in Westport on the 20th May this year to examine food sovereignty issues and to explore what practical steps are necessary to implement the ideas of the Food sovereignty Proclamation which was agreed and posted in 2015.  Among the questions discussed at this year’s event were: how can we accelerate the transition to a low carbon, fair and resilient society?; how can we produce both food and energy in ways that reduce greenhouse gases and their negative impact on the planet? Among the many suggestions was to continue to have April 24th – the actual date of the 1916 Rising – as a food sovereignty day in future years as it was this year. 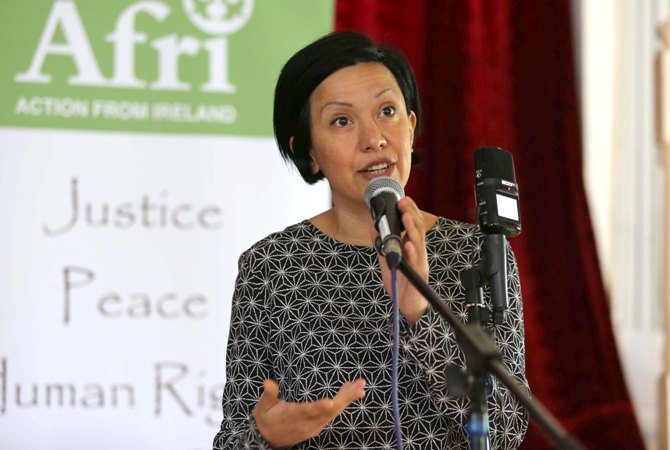 Following day saw Afri in Louisburgh, at the annual Famine Walk which was this year led by Palestinian activist and poet Rafeef Ziadah, Anti-Apartheid Dunnes Stores Striker Cathryn O’Reilly and Clare O’Grady Walshe, who has particular expertise in the area of food sovereignty (sadly Guatemalan Francisco Cali-Tzay, first indigenous president of a UN Treaty Body, was unable to make the walk due to a family emergency).  Cathryn O’ Reilly’s ‘casual’ recounting of her part in the two and a half year anti-apartheid strike delivered at the Famine walk was a powerful reminder of the importance of ‘boycott’ as exercised in that iconic event in the 1980s. The strikers refused to handle, effectively boycotted the fruits of apartheid in a strike that made them part of South Africa’s liberation struggle. Cathryn ended her presentation by expressing her support – and that of the other Dunne’s Stores Strikers – for Boycott, Divest and Sanctions, a Palestinian-led movement for freedom, justice and equality. This call was echoed by Palestinian poet and activist Rafeef Ziadah in a passionate and breath-taking presentation and recitation of her powerful poem, ‘We teach Life, Sir’ accompanied by the music of Phil Monsour.  Rafeef wrote about her visit ahead of the Famine Walk:-

“As I join the Afri Famine walk this Saturday I honour those who walked those steps to Louisburgh in Co Mayo, just as I do my own grandparents who were forced out of Palestine in 1948 when the state of Israel was created. With me on the walk will be the courageous Cathryn O’Reilly, who was a leading member of the Dunnes Stores strikers who were suspended by management for refusing to handle the “fruits of apartheid” in 1984 during the anti-South African apartheid era.

As the Palestinian-led movement for Boycott, Divestment and Sanctions (BDS) movement against Israel’s regime of oppression gains ground around the world, we are inspired by the historic example of the workers at Dunnes Stores and hope to see such grassroots acts of solidarity supporting the Palestinian struggle for freedom, justice and equality.

BDS upholds the simple principle that Palestinians are entitled to the same rights as the rest of humanity. It aims to end international support for Israel’s regime of apartheid and settler colonialism that began with the Nakba. It is no coincidence that the word boycott was coined in Ireland and continues to be a powerful tool of action for all oppressed.” For full article see here.

Film about the Famine Walk by RoJ

Clare O’Grady Walshe concluded the opening ceremony with a profound contribution on the theme of famine and food – an issue that links all peoples in all places around our interdependent planet.  About 120 walkers were then ferried out to Delphi Lodge to be welcomed by Michael Wade and his staff. Refreshments were provided and an oak tree planted with words from Choctaw Gary White Deer and   Máire Nic Fhearraigh. 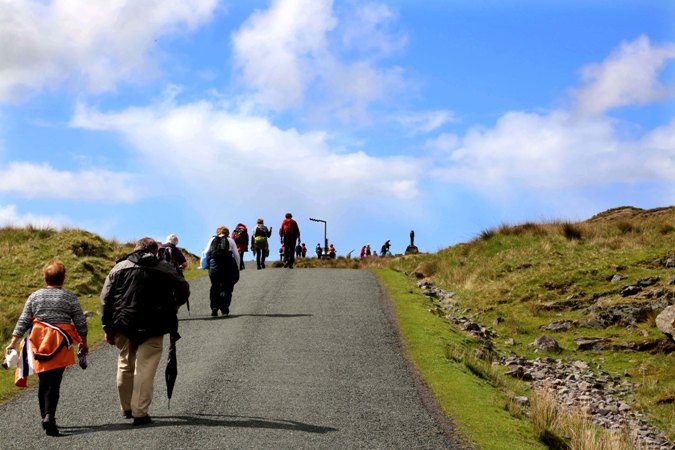 The walk was completed in pleasant weather conditions and the weekend trilogy ended with a marvelous evening of music with Máirtín O’ Connor and his family. This was a new and very welcome extra dimension to our Famine Walk weekend and over a hundred people gathered in the Derrylahan in Louisburgh for an evening of extraordinary entertainment, the proceeds of which were given to Afri. Special thanks to Máirtín and his family, Mick Gavin and Cathal Ruane who helped promote the event in Castlebar and Westport.