Reflections on the 30th Famine Walk from Rob Fairmichael 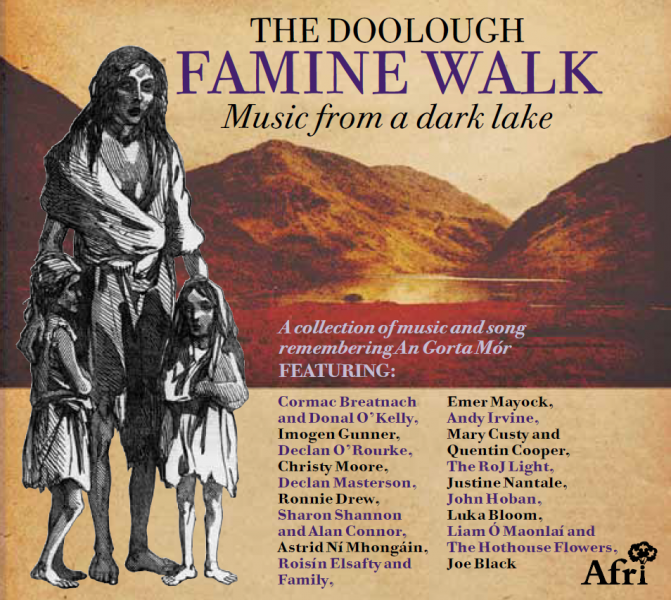 ‘Music from A Dark Lake’ – CD of music from the Doolough Famine Walk available to buy from Afri now! Buy online at www.afri.ie/donate or contact us directly

On 20th May 2017 a couple of hundred people set out  on the 11 mile walk from Doolough/Delphi Lodge for Louisburgh in bright, early summer weather, and it remained dry and bright. They had earlier heard Joe Murray, Danny Cusack and Donnah Vuma speak, and Joe Black sing. The theme, of this the 30th annual walk, was not just the commemoration involved in the Famine Walk but the inhumanity of the Direct Provision system for asylum seekers in Ireland today which treats people not as human beings but as numbers. A tree was planted in Delphi Lodge which again welcomed walkers, a stunning contrast to 1849. These are The Facts.

But what about The Feelings? Every walker has their own feelings, their own reason for undertaking this 11 mile walk.  Remembrance and commemoration are the principal reasons and some people would fast during the walk as an act of solidarity. There is also the challenge of a long walk, and if people are not able then a shuttle car takes them onward. There is beautiful scenery, interesting conversation – on the theme or everything else under the sun – and interaction with others. Those who stay in Louisburgh for the evening enjoy ceol, ól agus craic. But for most being there is also a physical statement of their commitment to justice and peace in the world today.

It is difficult to imagine what it was like for the walkers of 1849, to put ourselves in their shoes – and presumably many of them did not have shoes. They would have been cold, numbingly hungry, desperate, in many cases already ill, ‘on their last legs’, fearful, tearful, knowing that without help their end was near. They had little hope but what hope they had was invested in what would have been a miserable and painful walk to Delphi Lodge.

When they were refused help from the Poor Law Commissioners, who had just had their dinner at Delphi Lodge, it must not only have seemed The End, it was the end. All hope would have drained from them. They had been condemned to death. But they tried to trudge back. As we know, many died on the way, and the outcome for those who did make it back was bleak. The system had judged them unworthy to live. 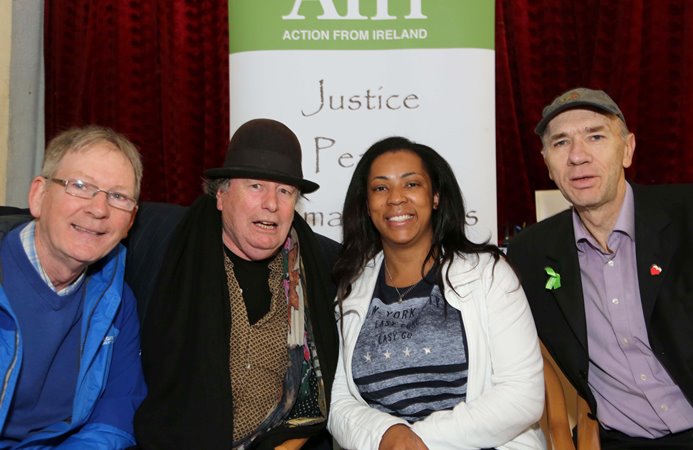 But what of the Poor Law Commissioners, who refused help to starving people? They had a system to adhere to and the system was unable to cope in such dire circumstances. There was nothing they could do. They could not offer help to such numbers. It is likely their consciences were pricked but they felt powerless to help, and they could not go outside the system – that would be too much, to invoke chaos and disorder. The brooding presence of the starving at the gates would have been felt during dinner. But the system was the system and that was that.

The Poor Law Commissioners, apart from any closet agnostics, would have been Christians. They would have been familiar with the story of Jesus feeding the 5,000, which appears in all the Christian Gospels. Whether you believe this story was a miracle, a shaming of people into sharing their food after a young boy embarrassed them by being willing to share what he had, or a work of fiction, it has a point. That point is that feeding people is a necessity, an act of great importance in taking care of basic human needs.

There is nothing wrong with systems when they serve the needs of people. There is everything wrong with systems when they do violence to people, ignore their needs, treat them as non-persons, dehumanise them. The Poor Law Commissioners were unwilling and unable to step out from their system, to address their common humanity with the starving at their gate. 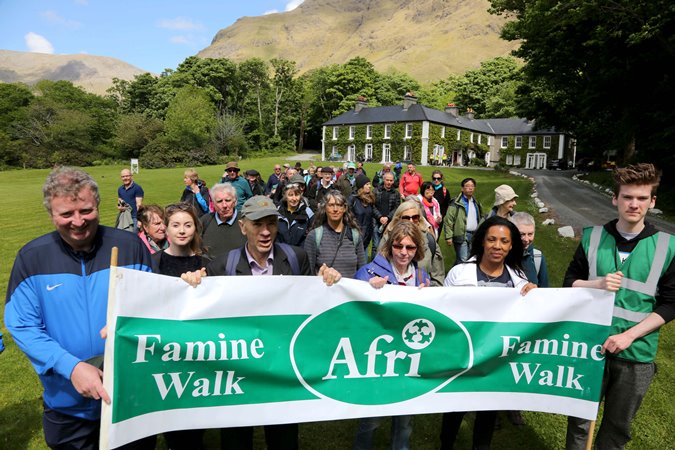 Sinéad O’Connor’s “There was no Famine” illustrates the counterpoint to this, as does Christy Moore’s “On a Single Day”.  The latter was penned by Peadar O Riada and is included on the new Afri “Music from a dark lake” CD of music and song remembering An Gorta Mór and launched at the Famine Walk this year. “On a single day” is a song/rap detailing the exports of food from Cork harbour ‘on a single day’ during the Famine. There was plenty of food. But it was not theirs, it did not belong to the starving, and the reason it was not theirs is tied up with the colonial exploitation of Ireland and a grossly unjust system.

Systems still exist, indeed there are systems never dreamt of in the times of the Great Famine/An Gorta Mór. As then, some of those systems serve humanity and the needs of people and some do not, and some are a seemingly inextricable mix of the good and the bad, the beautiful and the ugly. As then, the powers that be accept The System and many people go along with that. But if we are to be human, to recognise the humanity of others, at home and abroad, we have to step out from these systems enough to ask – Do they serve the needs of people?

The Famine Walk is about highlighting the needs of people. It is about remembering those who died in terrible circumstances because their needs went unmet. It is about extrapolating from that situation to ask what needs are unmet today in Ireland and elsewhere. Ultimately it is about a belief in humanity and its ability to rise above the restrictions which the powerful would invoke through the system, and in the possibility and necessity of building a human-centred world.

There is a long walk ahead yet.

Rob Fairmichael is an Afri board Member and Coordinator of INNATE

The Afri Walk also featured on Nuacht TG4 – you can watch it here.