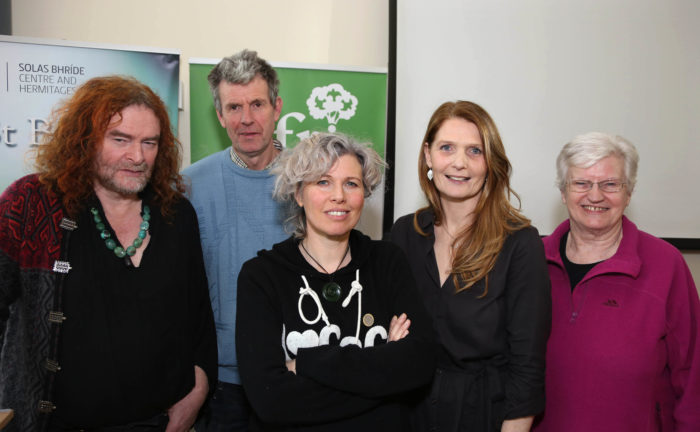 Afri’s Feile Bride event for 2020 was entitled ‘Rekindling; Revitalising; Rewilding and Restoring’ and was set in the context of the need for urgent action on climate change. Over recent years, many people, of all ages, are getting actively involved in fighting for change. This was reflected at the conference, where we heard from a number of mature activists who have been around for some time but also from Ruby Jo, who set up “There is no planet B” as an 11 year old activist! This shows that we can all be involved in action to tackle climate change – as Greta Thunberg says ‘no-one is too small to make a difference’. This was the 28th year of tending the Brigid flame in Kildare, which as Rita Minehan explained, was lit at the first Afri Conference in 1993 and burns as a “beacon of hope, peace and justice.” It was noted, that one of the trademarks of those who attend Féile Bríde is a spirit of positivity and hope, and a determination, no matter what, to keep on working for a better world for all.

At the beginning of the event we had beautiful music from Cormac Breatnach, Steve Cooney, Emer Lynam and Roger Whelan.

The first speaker of the day was Clare O’Grady Walshe, who recently published her book “Globalisation and Seed Sovereignty in Sub-Saharan Africa”. Clare spoke about why seed diversity matters for our food supply because crops can get wiped out by disease and climate change, which can lead to hunger and death.

“Farming has become an attack on nature” is what our second speaker, Mary Reynolds stated. She spoke about how we need to be aware of biodiversity and habitat loss. She founded a movement called We are the Ark – Ark standing for Acts of Restorative Kindness. This happens when a green space is allowed to grow freely, so it can restore itself back to the way it was.

Our third speaker Nelly McLaughlin explained that “every day is earth day.” Nelly spoke about Green Sod Ireland which works with local communities to restore habitats and enhance biodiversity. In some cases, land has been given to Green Sod Ireland where it is held in trust for the future welfare of people and planet. “We live in a planet of abundance, not scarcity”, she said.

After lunch, we had wonderful lively and energetic music from the Dublin Ukulele Collective, which had the participants on their feet to the sound of Creedence Clearwater Revival’s ‘Bad Moon Rising’ among other classics.

Ruby-Jo then spoke about “There is no planet B” – a club that she and her friend Isabella set up when they were in fourth class. Ruby-Jo wants to inspire others to stand together to make a change and raise awareness of climate change. She certainly inspired those of us lucky enough to hear her speak on February 8th.

Shivam O’Brien then spoke about how he was involved in allowing 200 acres of Welsh forest to return to its wild nature. This is an extraordinary example of what can happen when land is allowed to heal and restore itself. See a clip of the work they do here.

Micheal Long of Cabragh Wetlands was our final speaker and said that “each person’s awareness is important”. He explained how wetlands are rich in biodiversity. And how the Wetlands where he works have up to 15 different habitats including ponds, reed swamps, hedgerows, streams and wild flower meadows. It is frequented by walkers, photographers, artists, families and children in search of knowledge. It is a great place to educate future generations about the importance of conservation, preservation and biodiversity.

The day concluded with RoJ Whelan singing the great Pete St John song about Climate Change – ‘Waltzing on Borrowed Time’ – including the verse:

“Across the world in every land, let a new awareness grow
That Nations must protect the earth
As the seeds of hope we sow
A hope, a dream, a way of life when man and nature rhyme
And creatures of the earth won’t need to waltz on borrowed time”