Ramblings and the 2017 Famine Walk 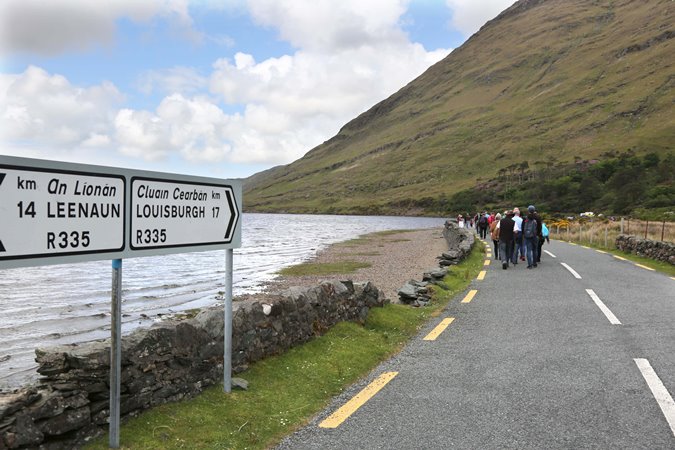 Sometimes you really do count your blessings.  There I was, in November 2016, setting out from Louisburgh Co. Mayo on a cold wet autumn morning, wondering whether my right leg, mildly strained in a recent tennis match, would manage the eleven-mile famine walk to Doolough.

How trivial an ‘injury’ in the context of the 1849 tragedy the walk commemorates.  Hundreds of starving men, women and children, ordered to tramp those eleven miles to Delphi Lodge, were denied an audience, let alone the relief they sought, by the men of power.  Many died by the roadside on their despairing return trail.

Afri’s Famine Walk happens each May, but this was a re-enactment for BBC Radio 4’s ‘Ramblings’ series.  Local historian Mary O’Malley painted a poignant scene around her own family story, and Joe Murray set the context of Afri’s work for justice, human rights and sustainability.

Yours truly was to handle ‘the broader history’; thank goodness for Cork University Press’s superb Atlas of the Great Irish Famine!  Its unique blend of scholarly analysis and humane reflection dispelled some of my clouds of ignorance about that great lacuna in our history and culture.

The Atlas breaks the twin silences of the survivors and the scholars, whilst respecting the irrevocable silence of the over one million victims.  It allowed me to sketch some of the broader background to Doolough’s tragedy, along with some nuggets of salutary and surprising information.

Things I never knew: fish and seafood did form part of the pre-Famine fare of those who could obtain them.  Ireland’s potato-based diet, though fatally precarious, made the pre-Famine population healthier than the European average.

By the Nineteenth Century almost all major Irish towns were ports.  Westport had nearly half its population in manufacture in 1821 – but in cottage and artisan production which soon drowned in the tide of new imported factory commodities.

This put the populace at the mercy of what Professor Willy Smyth graphically brands ‘a byzantine hierarchy of grasping middlemen.’  The ‘cottier’ had to work 250 days for the landlord each year just to retain a cabin and one acre for potatoes.

Our folk memory of a flint-hearted elite, though usefully refined by the Atlas, is broadly valid, but perhaps any impulse towards self-righteousness is offset by the more recent history of ‘austerity’ and population displacement.

Flinty hearts there were indeed.  One order directed a 20% cut in the Relief Lists, ‘retaining only… the Helpless, totally Destitute, and weakly from Illness.’  Chancellor Wood said Ireland could achieve ‘anything approaching to quiet or prosperity’ only through ‘a purgatory of misery and starvation.’

Prime Minister Russell, personally sympathetic, and alerted to calamity by Lord Lieutenant Clarendon, failed to restrain the ‘moralists’.  In November 1847 Chancellor Wood urged Clarendon to enforce rent-collection: ‘Arrest, remand… send horse, foot and dragoons… to the verge of the law, and a little beyond.’

As late as 1856 George Nicholls, architect of the Poor Law regime, regretted that Cromwell hadn’t stayed longer and done a proper job!  In 1880 Sir Charles Trevelyan wrote in the Times that his Irish policy had raised the people ‘through much suffering, to a better standard of subsistence.’

Clarendon’s was not the sole or strongest dissenting voice.  In his last Commons speech in February 1847 Daniel O’Connell warned ‘one-fourth of our population will perish.’  London-born Edward Twistleton resigned as a poor-law commissioner, condemning ‘a policy which must be one of extermination.’

Sir Randolph Routh of the Relief Commission declared: ‘You cannot answer the cry of want by a quotation from political economy.’  And the Atlas records how, at the very start of ‘The Potatoe Disease’ in 1845, someone was anticipating Keynes.

The Northern Standard suggested that if all the landlords pooled one-quarter or so of their rents and bought grain to sell at a fair price – ‘a mere mercantile speculation, based upon a feeling of humanity’ – they need not confront ‘a ruined and starving tenantry.’

The Quakers had the moral courage to shun the cruelly shambolic official relief-works system.  They persisted with soup kitchens – the authorities eventually saw the point, too little and too late – and even established a fishery school on the Claddagh in 1848.

Surviving the ‘Ramblings’ walk intact, I found myself the following week at another signature Afri event, the ‘Hedge School’ in the Institute of Technology, Blanchardstown.  One of its topics – a critique of the Direct Provision system for refugees and asylum seekers – all too disturbingly recalled the themes of the Famine Walk.

The other topic, Roger Casement and his legacy, was clearly relevant to 2016’s commemorations, and to Afri’s concern with global justice.  Sorcha Pollak vividly described Casement’s work for rubber-plantation workers in Putamayo in north-eastern Brazil.

Angus Mitchell’s recent biography traces Casement’s deepening opposition to empire and its impact on his beloved homeland.  When a 1913 typhus outbreak in Connemara ‘reawakened the spectre of the Famine’, Casement wrote of an ‘Irish Putamayo’, and organised both publicity and relief.

Soon he would denounce the outbreak of world war, co-founding the anti-war Union of Democratic Control.  Two allies here were the liberal MP Charles Trevelyan, grandson of the first Sir Charles, and the philosopher Bertrand Russell, grandson of the sympathetic but ineffectual Prime Minister Sir John.  A small world indeed.

The ‘Ramblings’ programme is available on the BBC Radio 4 website to listen here.   The 30th-anniversary Famine Walk, on Saturday 20th May 2017, was marked by a new CD, Music from a Dark Lake, available from Afri.

– John Maguire is an Afri board member