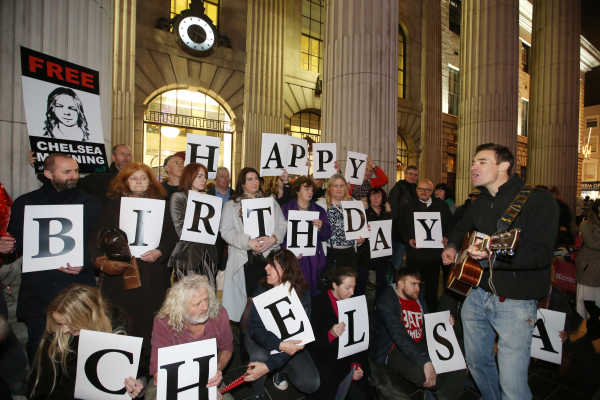 “The information that Manning gave to the public exposed the torture and horror of Guantanamo Bay. It showed us the true human cost of the wars in Iraq and Afghanistan, and changed journalism forever. Chelsea Manning told us what we deserve to know. Obama now has a chance to do the right thing and pardon Chelsea Manning before he leaves office next office month. If he does not, it will be another stain on his legacy forever” said Joe Murray, Director of Afri, a justice and human rights organisation.

Manning, whose grandfather came from Dublin, has been sentenced to thirty five years after leaking information on U.S military abuses while serving as an intelligence analyst in Iraq.

Manning has been incarcerated since May 2010, in addition to almost a year in solitary confinement before her trial. A new White House website petition of over 100,000 signatories is calling on President Obama to release Manning for time served, which they say is more than any other person who has ever disclosed information in the public interest.

Although Private Manning continues to write for The Guardian and other media she  has also attempted suicide twice this year and is being punished with additional time in solitary and is facing an extended prison sentence. Her work has led her to receive the Sean MacBride International Peace Prize, the Sam Adams Award for Integrity in Intelligence and to be nominated for a Nobel Peace Prize.

“Every now and then you do come across a significant choice. Do you really want to find yourself asking whether you could have done more, 10-20 years later? These are the kinds of questions I didn’t want to haunt me.” Manning recently said in an interview with Amnesty International.

“If you had free reign over classified networks… and you saw incredible things, awful things… things that belonged in the public domain, and not on some server stored in a dark room in Washington DC… what would you do?”

“God knows what happens now.  Hopefully worldwide discussion, debates, and reforms… I want people to see the truth… because without information, you cannot make informed decisions as a public.”