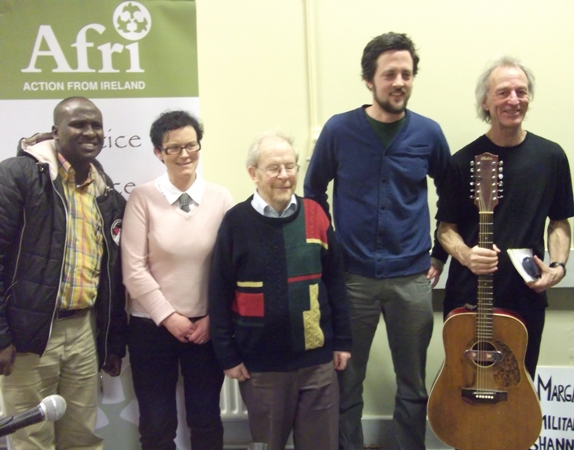 Speakers included Afri’s partner Abjata Khalif of the Kenyan pastoralist Journalist Network, Fergal Anderson a small farmer from the west of Ireland, veteran writer and campaigner on issues of human trafficking, Donal Dorr, and Mia De Faoite, a survivor of prostitution speaking from her experience. 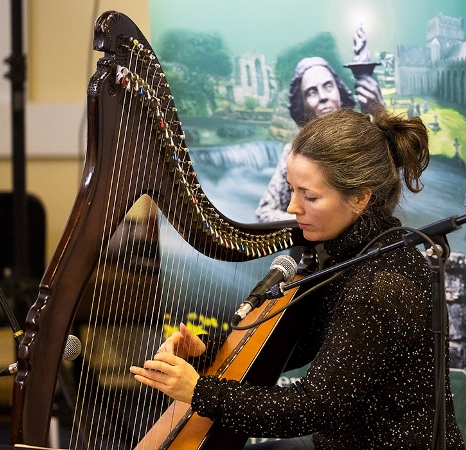 Following the wonderful music of Fionnuala Gill and a moving and insightful introduction by Rose Kelly, Afri’s Development Education Co-ordinator, Fergal Anderson spoke about food sovereignty.  His view of food is that it is a fundamental human right rather than a commodity (which is based on buying and selling and primarily on profit making). He went on to say that our society today is out of balance and our world view is defined not by nature but by profit. Fergal strongly emphasized the need for locally produced food for local people.

Abjata Khalif took the stage to present his extraordinary work in Kenya where they empower local ‘Traditional Birth Attendants’ (midwives), in Northern Kenya with the help of Afri and others, by distributing solar lamps to help the midwives to carry out safe delivery at night in remote areas where there is no electricity or clean water. Solar lamps are also provided for school children, conflict widows and women ostracized from their communities because they have contracted T.B.  Brian Fleming brought us up to lunch with an action packed musical treat on the Bodhrán: “The Day the Apaches Came to Town“. 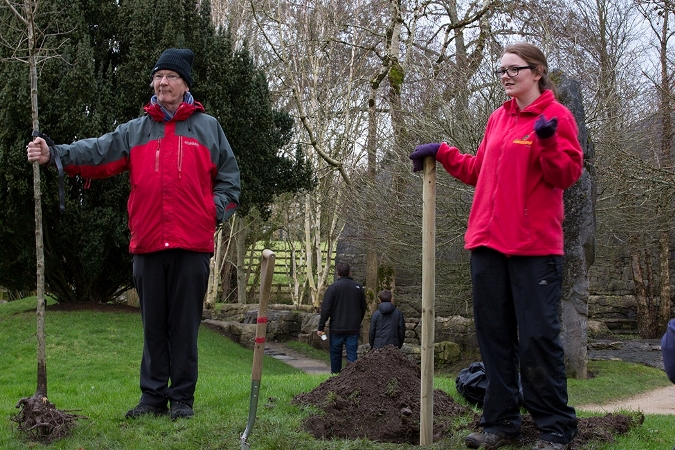 Kirsty Daly (right) from the Native Woodland Trust speaks about the importance of tree planting – and planting native species in particular – while Joe Murray (left, Afri’s co-ordinator) holds the oak tree that was planted during the day. Photo: Tatiana Turchina

After lunch the attendants took a walk to plant an oak tree.  Kirsty Daly, from the Native Woodland Trust – with which Afri has recently formed a partnership – spoke about the need for planting native Irish trees, explaining that Ireland’s current tree cover is approximately 10% compared to a European average of 40%. This year Afri dedicated the oak tree to peace maker Margaretta D’Arcy . 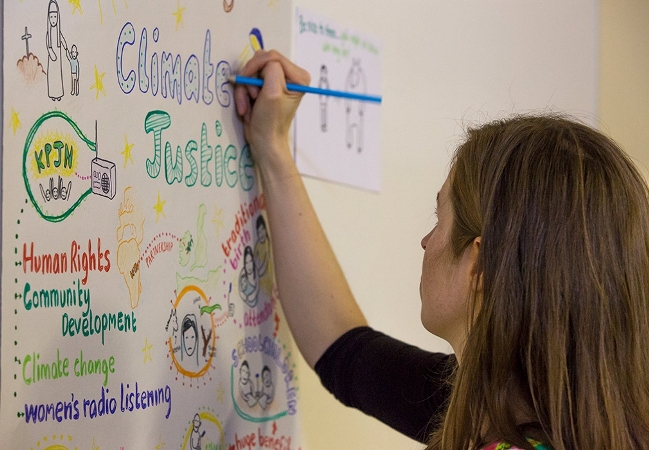 Throughout the day Eleanor Reilly worked on a “graphic harvest” to capture the major themes and ideas from the day. Photo: Tatiana Turchina

The tree planting was followed by Donal Dorr who gave a presentation about “Today’s Hidden Slavery” and showed the shocking figures of human trafficking, highlighting the fact that there are two and a half times more people in slavery today than there were during the height of what we call the ‘slaved period’.

Donal’s presentation was followed by a moving contribution Mia De Faoite,  a sociology student from NUI Maynooth and campaigner against human trafficking,who is involved in the “Turn off the Red Light” campaign to criminalise the buying of sex.  Mia spoke honestly about her harrowing experience as prostitute survivor, and how this industry works and about the young girls trafficked to this country and her experience of knowing them from working alongside them and becoming friends with them.  To find out more about the “Turn of The Red Light” campaign, you can visit their website: http://www.turnofftheredlight.ie/

This was followed by a World Café, providing an opportunity for participants to form in groups and engage in exploring the themes of day, while Eleanor Reilly ‘harvested’ a creative drawing which visually represented the ideas shared during the day.  You can see one example of her harvest, below.

We had a wonderful conclusion to the day with poetry and songs from poet, dramatist and arts facilitator, Pete Mullineaux.  Here he performs “A Song for the Baggage Handlers“.

Report by Ali Hanaf, IT Blanchardstown student and Afri Intern 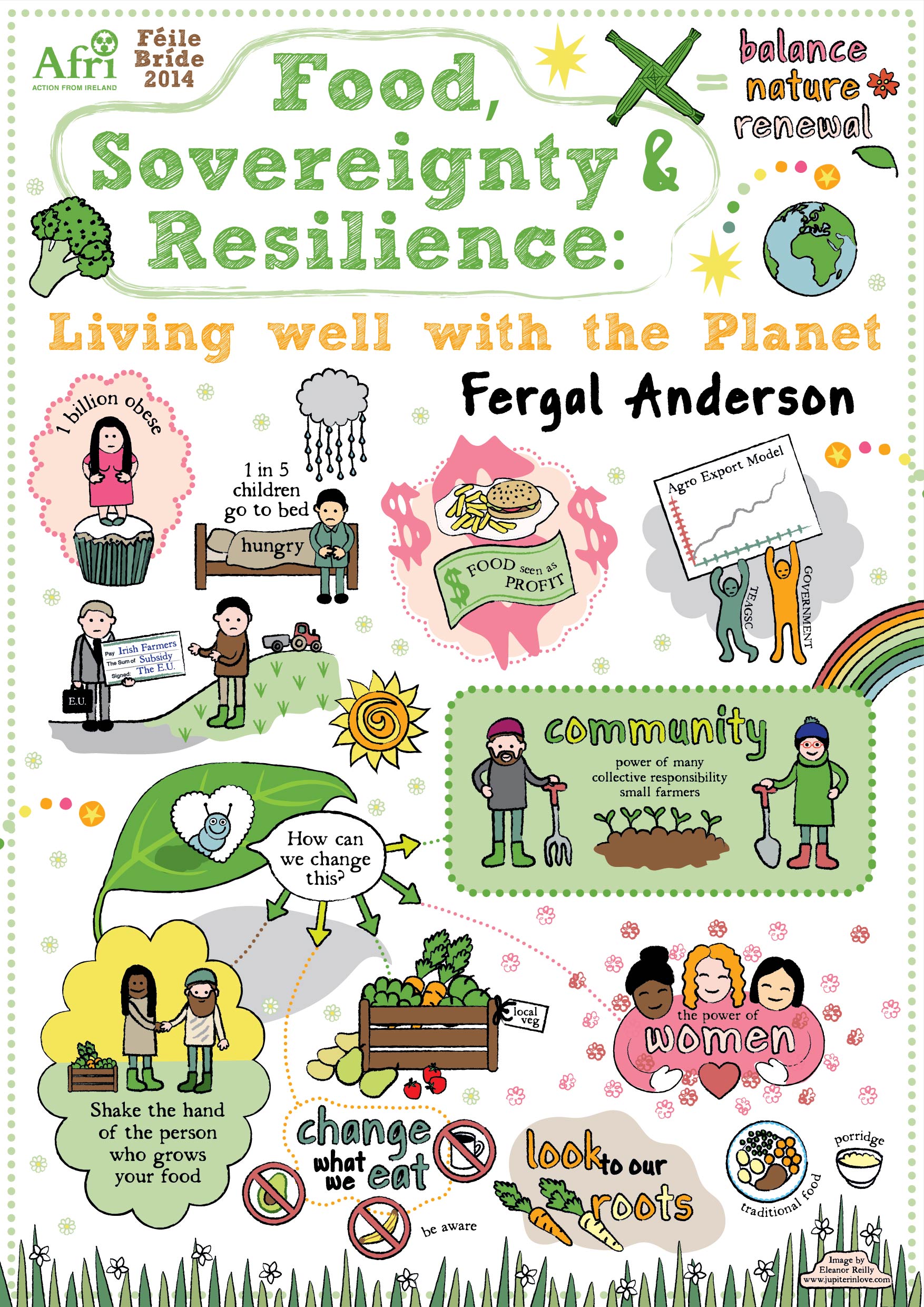