i Feb 13th w No Comments x by Afri 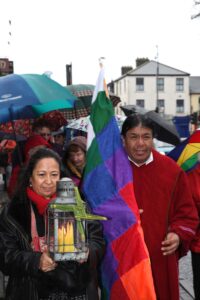 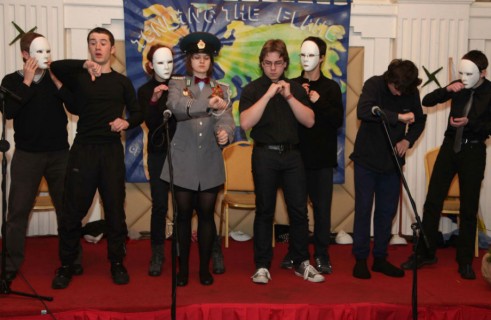 Colaiste Éinde students performing “What If”

At the start of Afri’s Feile Bride, the pupils of Coláiste Éinde, under the direction of Pete Mullineaux, staged a remarkable drama that asked the question “what if?”. What if the world was organised differently, in a spirit of cooperation and compromise rather than of conflict and greed? I was reminded of a story told about the Irish revolutionary Peadar O’Donnell, who wrote an article critical of his erstwhile colleague Eamon De Valera and his record in government, especially the fact that half a million people emigrated from Ireland under De Valera’s stewardship. The story goes that De Valera rang O’Donnell to protest, claiming that had O’Donnell been Taoiseach half a million people would still have emigrated. To which O’Donnell replied, “Yes, Eamon, but not the same half million”. I like to think of the very different Ireland we might have now if those who had left had been able to stay, and if those we could have most done without had departed: what if?

Be the Change: (from left to right) Mary Carmody, Roisin O’Brien and Bernie O’Rourke

What if we looked at the world differently? Mayra Gomez tilted the conventional map of America so that it seemed to us sideways, but why is the conventional view the conventional view? What if we looked at things differently? What if we widened our gaze to allow us see and value the whole lifeworld – humanity, animals, earth, air, water… What if we also widened our frame of historical reference in order to see, and learn from, ancient histories and cosmologies? These were questions Mayra posed, urging us to respect ancient wisdoms, not as archaic artefacts but as models and inspirations to face our challenges today. She talked about how ancient societies practiced participatory models of genuine democracy, a form of deep democracy that is truly threatening to those who have power and privilege, such as those who stood to gain from the privatisation of water in Bolivia – a process resisted and reversed by a popular movement drawing inspiration from indigenous traditions and histories.

Short video of the day by Dave Donnellan.  Music provided by Herman Tintaya.  (Please note that we have a limited number of  Herman Tintaya’s music CDs and DVDs on sale.  Please contact the Afri office for more details!)

There is much to learn from such struggles. For example, here in Ireland we are paying the socialised debts of private financial speculators and are being told that there is no alternative to doing so. Yet countries such as Argentina and Ecuador have shown that the loan sharks can be stood up to and debt written down – inspired by their victories, a campaign called Anglo: Not Our Debt is urging the Irish government to display similar backbone and principle today.

If we in Ireland and in the West (the Global North) can learn from the Global South, then we must also remember that we have huge responsibilities towards the Global South. We must, for example, stop destroying Southern lives through a growth-orientated economic system that fuels global warming. We must, as Róisín O Brien and her colleagues from the ‘Be The Change’ movement told us, change “the vision of the North”. We must, they assured us, stop “living in a trance” whereby we believe what we are doing to be somehow rational and sustainable when in fact it is neither, and take action to promote a genuinely rational and sustainable way of living. And we must do so with “a sense of hope that it is not too late to take action”, with “fire in our bellies” – just “do it, damn it”!

This action cannot be confined to personal and community transformation, vital though those levels are. We must also engage with and challenge wider political and economic causes of structural injustice. Terry Eagleton has written that “what is realistically needed to repair society is beyond the powers of the prevailing system, and in that sense is impossible”. But, in response, we can redeploy the student slogan of Paris 1968: “be realistic, demand the impossible”. Systems, as well as people, can and must be changed.

All photos by Derek Speirs