i Sep 14th w Comments Off on Famine Walk in Drumshanbo, Leitrim x by Afri 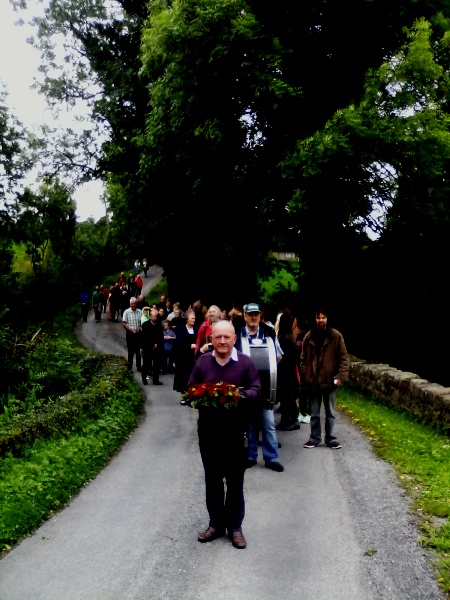 The walk consisted of over sixty people which included Sinn Fein councillor Brenden Barry and Nancy Woods of Drumshanbo Comhaltas as well as poets and musicians from around Leitrim, A bass drum played by Ronan McManus of the four Green fields flute band lead the walk as it made its way to the famine graveyard where over 500 victim’s of an Gorta Mor are buried.  The graveyard was attached to the old pre emancipation Church of Murhaun which stood there in 1744 before St Patrick’s Church was built in 1851 closer to the village.

Fr. Frank Murray of St Patrick’s Church spoke of the importance of remembering the victims of the great hunger, a huge humanitarian disaster with well over a million deaths and millions emigrating, Fr. Frank reminded everyone that suffering still continues around the world and in our own country. A minute’s silence was held before the laying of the wreath by a local girl accompanied by Emma Benson of Drumshanbo secondary school on concertina playing an air.

Donal O’ Kelly spoke on behalf of Afri, outlining the importance of active remembrance with reflecting, understanding, empathising and alerting ourselves to injustices around the world especially to the refugee crisis and Irelands role in taking refugees. Mairead Ní  Chathasaigh read words from Na Prataí Dubha and played  Annach Cuain while Bryan Ryan planted an apple tree which was donated by Lough Key Garden Centre run by Gerald and Austin Mullarkey.

The ceremony finished with students of Drumshanbo traditional music course Mairead Ni Chathasaigh tin whistle, Grainne Ní Odhrain fiddle and Bryan Ryan guitar playing the Inis Oirr. Bryan Ryan spoke about the  men, women and children who died between the years 1845-1851 and of  many who died on the coffin ships; the fortunate ones were buried in graveyards many more died in ditches and fields or  by the sea and lakeshore. Leitrim was one of the counties  worst affected by the great starvation, a term Mary Robinson used to better describe the humanitarian disaster that happened to lreland in the 1840s, a country which had an abundance of food. It is planned that a similar active remembrance ceremony will take place in Drumshanbo in 2017.