i May 20th w Comments Off on Famine Walk 2014: From Famine to Food Sovereignty x by Afri 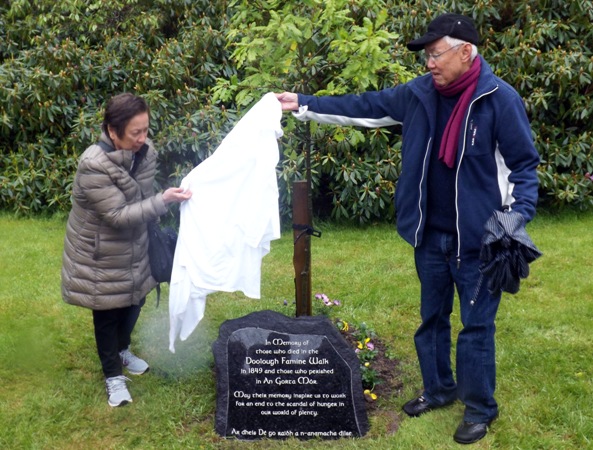 Coni Ledesma (left) and Luis Jalandoni (right) from the Philippines unveil a Famine Memorial on the grounds of Delphi Lodge during the 2014 Famine Walk. Photo: Rob Fairmichael

But the Afri Famine Walk is not some ethereal revisiting of a past, if tragic, time. It very directly links past, present – what is happening in the world today with causes similar to or the same as what caused and exacerbated the Great Famine in Ireland – and future – and asks us to recommit ourselves to ending famine. There was food, there is food, the question is who controls the food and what happens to it. Some walkers carried posters of the names of individuals who died in that and more recent famines.

The theme this year, “From Famine to Food Sovereignty”, was well explored by the walk leaders, Emanuela Russo, Luis Jalandoni and Paul Nicholson. Luis Jalandoni spoke of the 70% of Filipinos who struggle to get by on €1.70 a day in a country fertile and rich in natural resources; he spoke of the mass resistance to government policies which support big landowners and multinationals.

All of the speakers emphasised the right to adequate food as a human right, and opposing the multinational viewpoint of food as a commodity. The latter is the pseudo-economic ideology which leads to the obscene shortages of food, the terrible struggle to survive, and to malnutrition, starvation and even death. They might as well try and control the air we breathe – in many cases they already control the water we drink. And food sovereignty and security should be an issue for Ireland.

For the second year in a row the weather unleashed buckets of rain on walkers, but those who were fit and well were totally undaunted by such trifles. By Doolough itself I witnessed one young woman, already saturated, not seek the narrow bank to avoid water up over her trainers, but plough right through the middle of a flood. That was the attitude; is féidir liom/linn.

The unveiling of a stone memorial at Delphi Lodge to the Doolough Famine Walk of 1849, linked of course to the present, was the highlight of the end of the journey. But the playing by Imogen Gunner, and friends, of her specially composed piece, ‘Turned away’, while participants struggled to keep musicians and their instruments dry through a canopy of umbrellas, was haunting and beautiful. It also brought to mind the old proverb Ar scáth a chéile a mhaireas na daoine / People live in one another’s shelter. 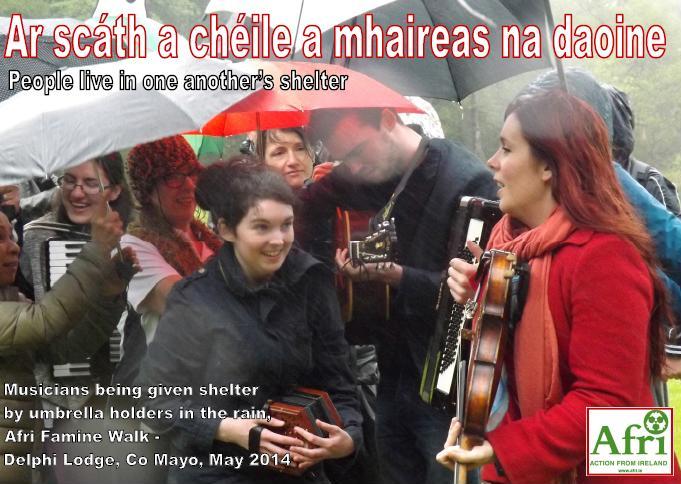 Although it is a serious occasion there are many lighthearted moments as participants meet old and new friends and share together. Of course the day’s events, and others, require detailed analysis with the aid of liquid refreshments in the evening, a task this year made memorable for those who could stay by music from Imogen Gunner and friends.