Famine Commemoration: Without Food, Without Voice, Without Name

i Sep 14th w Comments Off on Famine Commemoration: Without Food, Without Voice, Without Name x by Afri 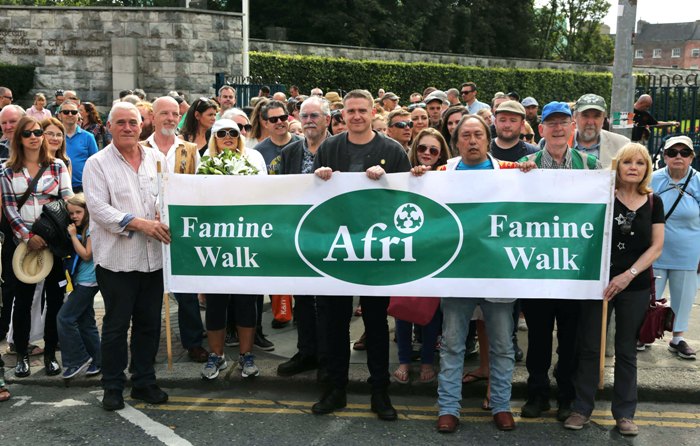 Damien Dempsey leads the walk from the Garden of Remembrance to Glasnevin cemetery organised as part of the Afri-Choctaw Famine Landscape Project. Photo by Derek Speirs

“The Famine is an awful wound on the Irish psyche and we don’t talk about it enough. I think we should have a national day of grieving when we all go a river bank or the sea or a lake and just grieve for all who died of hunger and as a result of Colonialism.”

These were the words of Damien Dempsey as he spoke at the Famine Walk which began at the Garden of Remembrance and ended at Glasnevin Cemetery on Saturday, August 27th 2016.  The theme of the walk was ‘Gan Bia, Gan Béal, Gan Ainm” (Without Food, Without Voice, Without Name) and it was organised as part of the Afri-Choctaw Famine Landscape Project.

The event was introduced by Choctaw Gary White Deer and the context and relevance of the walk was outlined by Joe Murray. There was music from RoJ and Paul as well as David Fury before we headed for Glasnevin in glorious sunshine.

We were met on arrival at Glasnevin by the CEO of Glasnevin Trust George McCullogh who spoke eloquently about Glasnevin and its connection with an Gorta Mór. Glasnevin Cemetery has the largest mass grave in Ireland, with tens of thousands of famine victims are buried at Glasnevin and, extraordinarily,  their names are recorded – a rare occurrence in terms of people who died in the famine.  Other speakers included Michael Doorley of Concern, who sponsored the event, and music from Damien Dempsey and Sean McKeon. As always, Afri and speakers linked the causes of the Great Hunger in Ireland with the causes of hunger, poverty, and disease in the world today – injustice and lack of control of resources. 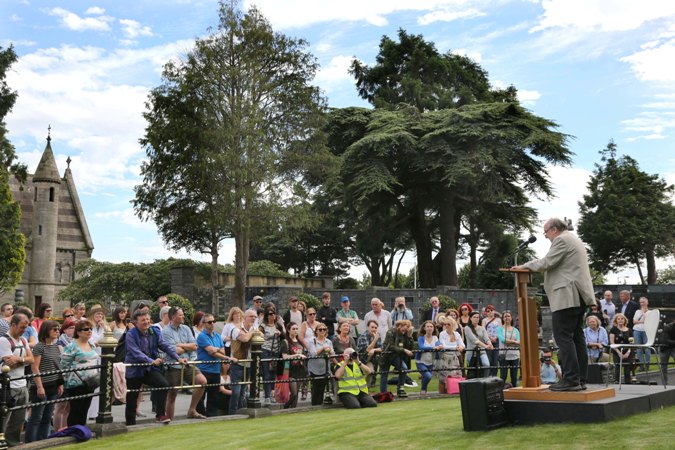