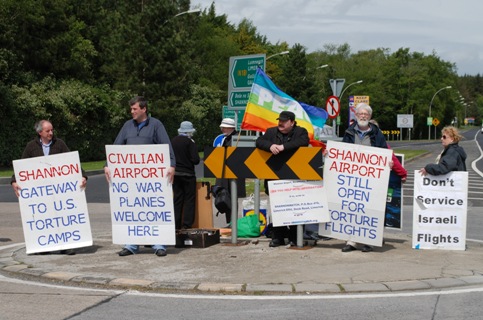 Afri strongly endorses Shannonwatch’s condemnation of the arrest of Deputies Mick Wallace and Clare Daly as a result of their action to inspect war planes passing through Shannon.

As the world drifts deeper and deeper into war, wreaking havoc on families, communities and our planet the actions of people like Mick Wallace and Clare Daly in attempting to put on the brakes should be applauded and commended – not penalised.  Wars facilitated by Shannon have helped to  destabilise areas in the Middle East and beyond, created the anger contributing to the rise of IS/Daesh  and unleashed the most serious refugee crisis since the Second World War

It is extraordinary that perpetrators of war and destruction can parade through Shannon unhindered while those who are opposed to war are arrested, demonised and imprisoned. The actions of Mick Wallace and Clare Daly should be a wake-up call to the Irish Government to reverse the shredding of the last remnants of our neutrality and end the use of Shannon for war and destruction.