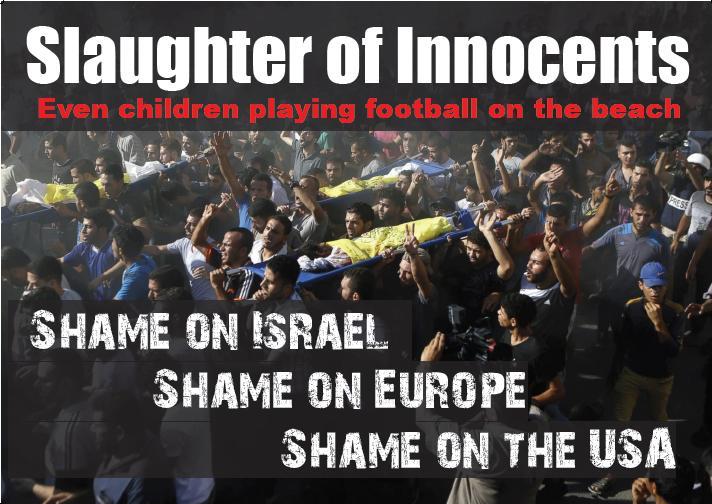 Yet in the face of an impotent international political system and an international community that, for the most part, remains resolutely silent in the face of such crimes, then failing to speak of these parallels (when recognising the sovereignty of all life) is a kind of treason: a betrayal not just of innocent Palestinian civilians but of humanity everywhere.

In its Resolution of 19th October 2000, the United Nations Human Rights Commission stated that it “strongly condemns the disproportionate and indiscriminate use of force in violation of international law by the Israeli occupying power against Palestinian civilians.” The UNHRC further adds that “the deliberate and systematic killing of civilians and children by the Israeli occupying authorities constitutes a flagrant and grave violation of the right to life…also constitutes a crime against humanity.”

Under the Fourth Geneva Convention, the brutal acts against Palestinians by Israel are war crimes.  All of these legal statistics are well known and speak for themselves, but when not implemented stand as a mockery of the sufferings from which they emanate and the vision of peace that inspired them.

Rudimentary historical observation should be enough to secure justice, but to paraphrase Maya Angelou, we are not facing history with courage but are tragically living and inflicting its wrenching pain again and again.

In the storm of war currently being unleashed on Gaza human beings are being massacred. That of course is the intention of the aggressors. The human reality is heart-breaking. On our Famine Walk each year, Afri carries the names of some of the victims, with an additional banner that states, ‘they all had names’. The same applies to war.

On Tuesday morning 8th July 2014, the Kaware family got a phone call telling them their three-storey house would be bombed. The family began to leave when a water tank was hit but then returned with members of the community who all came to the house to stand with them in an appeal for mercy. The Israeli jets bombed the building regardless with the roof full of people, family and community. Seven people died immediately, including five children under 13 years old. Twenty five more were injured and little Seraj Abed al-Gal died from his injuries later that day.
Appeal for Solidarity and Humanitarian Intervention

At the weekend, 14 Palestinian groups including human rights groups, unions, youth groups and women’s groups made a powerful appeal for solidarity and humanitarian intervention from the international community – from us. It is fitting that the last word is left to them:

“As Israeli leaders give promises of moving onto a next stage in brutality, we know there are more horrors yet to come. For this we call on you to not turn your backs on us. We call on you to stand up for justice and humanity and demonstrate and support the courageous men, women and children rooted in the Gaza Strip facing the darkest of times ahead. We insist on international action:
• Severance of diplomatic ties with Israel
• Trials for war crimes
• Immediate international protection of the civilians of Gaza
• We call on you to join the growing international boycott, divestment and sanction campaign to hold this rogue state to account that is proving once again to be so violent and yet so unchallenged
• Join the growing critical mass around the world with a commitment to the day when Palestinians do not have to grow up amidst this relentless murder and destruction by the Israeli regime.
When we can move freely, when the siege is lifted, the occupation is over and the world’s Palestinian refugees are finally granted justice.
ACT NOW, before it is too late!” (Appeal for Solidarity and Humanitarian Intervention, 12 July 2014)