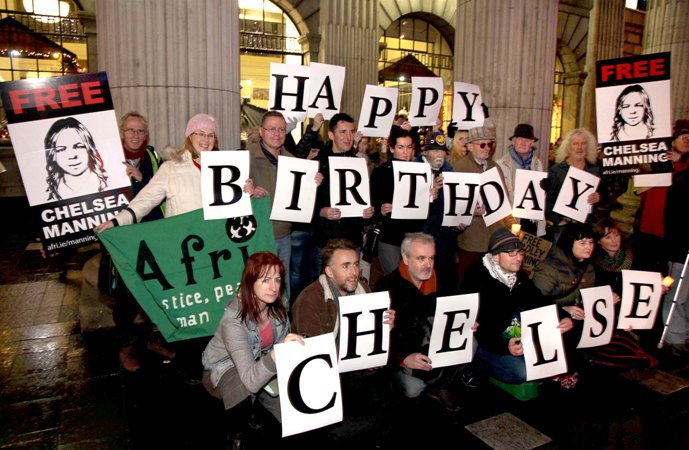 Afri is proud to support imprisoned whistleblower Chelsea (Bradley) Manning who was sentenced to 35 years in prison in 2013 for leaking files and footage of what supporters say is proof of U.S war crimes in Iraq. This has led to calls by groups such as Amnesty International for her release. A so called ‘collateral murder’ video leaked to Wikileaks by Manning shows U.S helicopters killing a group of civilians that included two Reuters employees.

In a recent interview on Amnesty.org Manning said “Every now and then you do come across a significant choice. Do you really want to find yourself asking whether you could have done more, 10-20 years later? These are the kinds of questions I didn’t want to haunt me.”

The International Peace Bureau (of which Afri is a member) awarded the 2013 Sean MacBride Peace Prize to Manning for her courageous actions in informing the public about US war crimes. The IPB’s Co-President Tomas Magnusson commented: “When Manning revealed to the world the crimes being committed by the US military she did so as an act of obedience to this high moral duty [to make known war crimes and crimes against humanity]”.

For Chelsea Manning, on her 27th Birthday

You and whose army?

At 22 I wasn’t much more than a playground for ideas
other people fed me.
I was three years away from even being brave enough
to explore my own identity.
It was years more before I stopped that navel gazing
and took a quick look outwards
and I’m still failing to come to terms with that at forty,
but you, at that age could gather the courage
and the words to say that as a solitary soldier
washed up in an army of macho war porn and murder
you wouldn’t stand for it,
as a loner in a theatre of torn up conventions,
of water-boarding, of torture,
you wouldn’t stay silent.
At twenty two, a kid, and right in the thick of things
you made it clear you hadn’t been fooled
by the all pervasive culture that says
there are times when it’s AOK to re-name humans
as nuts and bolt collateral.
Chelsea when they charged you in the military court
you made no Nuremberg excuses
of how someone made you do it,
and you didn’t spout on about flags or orders or duty
at twenty five you could condemn
an army for its war crimes for
its murders of civilians and children
and you could act on it despite the consequences
you could reclaim the meanings for us
of words like courage and justice,
now that’s what I call service;
someday I hope your country (and ours!) will grow up and deserve it
happy 27th birthday Chelsea
lets hope that for your next one you’ll be free.
And P.S Edward Snowden, keep on running!

Info on donating to the Manning family fund at http://manningfamilyfund.org/donate-to-the-family-fund/

Info on sending post and gifts to Chelsea Manning: http://www.chelseamanning.org/learn-more/write-to-chelsea-manning

Interview with Amnesty International: ‘Why speaking out is worth the risk’

Chelsea Manning’s relatives claim she was ‘tortured’ by US military: British relatives of US whistleblower Chelsea Manning have made claims that she was “tortured” by US authorities