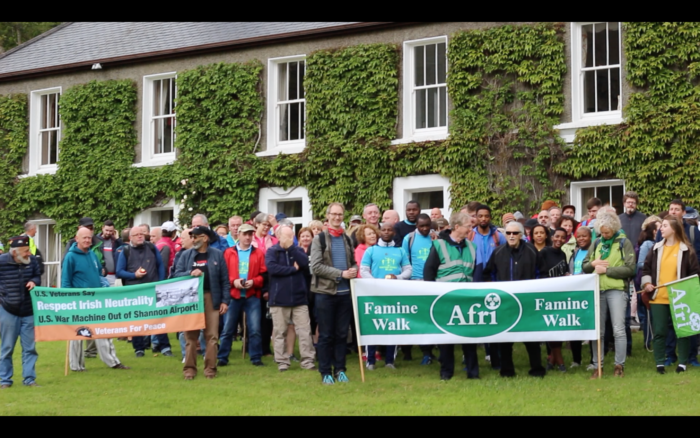 “Across the world in every land, let a new awareness grow

that nations must protect the earth

As the seeds of hope we sow

A hope, a dream, a way of life when man and nature rhyme

Walk leaders Oisín Coughlan from Friends of the Earth and Hanny Van Geel from ‘La Via Campesina’ expanded on this theme. Oisin pointed out that the Dáil had passed a Bill declaring a climate emergency and, following the ‘green wave’ in the recent elections now needed to take urgent  action to tackle this emergency. Among these actions is the urgent need to stop issuing licences for further exploration of fossil fuels off the coast of Ireland.

Hanny pointed out the urgent need to support sustainable means of food production rather than allowing control of the food we eat to be more completely controlled by corporations whose only concern is profit.  Walkers were then ferried to Delphi Lodge, where we planted a tree before setting  off for Louisburgh.  Tea and coffee was provided along the route by Glenkeen Farm and as usual, we gathered in Teach na n-Ól in the evening for more music, chat and conversation.

Afri’s 2018 Féile Bríde took place on Saturday 3rd February in Solas Bhríde in Kildare town.  It was a rich and full day with contributions from Peadar Kirby about caring for our global village, Hanny Van Geel (Via Campesina), Rose Hogan (Trócaire) on ‘food for life’, John Maguire on ‘Peace Meal Change’ and wrongfully imprisoned Sunny Jacobs and Peter Pringle, as well as music and poetry.  You can get a flavour of the day in a short film made by RoJ.

Here is a report from Sr Patricia Mulhall, who attended the conference:

This is the twenty-sixth year of another well-attended Afri conference hosted at Solas Bhríde Centre, Kildare.  As visiting speaker, Peadar Kirby named it, the Ard fheis of Afri. Some 200 people attended in the beautiful setting of the Centre & Hermitages, a centre of hospitality, brightness radiating a warm welcome. Brigidines – Mary, Phil and Rita – organise and manage the Centre with Cairde Bhríde, faithful friends and staff.

‘Light out of Darkness’ was a fitting theme for a day punctuated by music and message of hope. Speakers with academic presentations and personal stories enlightened and entertained the participants. The day began with a presentation from Peadar Kirby, entitled ‘Caring for our Global village.’ Peadar is Professor Emeritus of International Politics and Public Policy in the University of Limerick, Ireland. He is associated with the eco-village of Cloughjordan, Co Tipperary, a 67-acre site with 50 acres of land for allotments, farming and woodland as well as 50 low- energy homes. END_OF_DOCUMENT_TOKEN_TO_BE_REPLACED