That Russia is apparently massing troops on the Ukrainian border is an unwelcome action, as are proposed Russian naval exercises 240km off the Irish coast (especially given the potential ecological damage wreaked by the latter)anti-militarisation. All threats of, or preparation for, conflict serve to escalate an already dangerous situation as well as constituting a waste of resources that could be used to feed the hungry and protect the planet rather than fuel the flames of war. END_OF_DOCUMENT_TOKEN_TO_BE_REPLACED

We in Afri join with the world in expressing our sadness at the passing of our hero and patron, Archbishop Desmond Tutu. END_OF_DOCUMENT_TOKEN_TO_BE_REPLACED

(L-R) Joe Murray of Afri with Nobel Peace Laureate Mairead Maguire and Rob Fairmichael of INNATE at the lauch of The Downpatrick Declaration. 07.12.21 (Photo by Roger Whelan) END_OF_DOCUMENT_TOKEN_TO_BE_REPLACED

Since 2018, Afri has worked with our partners Development Pamoja and The Kenya Pastoralist Journalist Network (KPJN) to provide solar lights for families and vulnerable members of communities in rural Kenya. END_OF_DOCUMENT_TOKEN_TO_BE_REPLACED

Ireland has some part in the arms industry, as evidenced by an event being hosted by the Department of Defence this month in the Aviva Stadium, writes Joe Murray, co-ordinator of Afri — Action From Ireland END_OF_DOCUMENT_TOKEN_TO_BE_REPLACED

We have compiled a Calendar for 2021  with some suggestions as to how we can work towards a more sustainable world.

To order (at €7 per calendar including postage) please go to www.afri.ie/donate/ and click the donate button at the bottom of the page ‘donating’ the cost of your purchase and indicating the number of calendars you would like to purchase in the message box. Please make sure to include a return address and we will post your gift to you as soon as possible.

At many of our regular events, such as Féile Bríde, our Famine Walks and Hedge Schools, Afri has planted a tree to reflect our commitment to living in peace and justice with our species and our planet.  In 2021 we plan an exciting new chapter in this decades-long tradition, this will involve planting 18 trees or plants, corresponding with the 18 letters of the ancient Irish alphabet.

For more information about the project and how to get involved, please see our Alphabet Avenue brochure here.

Discussions on government formation are taking place in the wake of a demand by the electorate for a serious reshaping of priorities and policies. Issues of housing, education, climate change and of course health are to the fore.

One other topic, so far absent from the debates, must finally and urgently be aired if democracy and sustainability are really to be achieved: the massive realignment of our defence and military policies over recent decades.

Successive Irish governments have covertly enabled the EU’s NATO-linked militarisation, shamefully and implausibly claiming that ‘nothing is happening here’ while trotting out the incoherent notion of ‘military neutrality’ to conceal the reality.

We have had a Green and a White Paper on Defence, which never once mention more than 3.5 million troop movements, along with torture-related flights, through Shannon since 2003, all within a catastrophic, open-ended ‘War on Terror’.

This is totally at odds with the fundamental principles of Article 29 of Bunreacht na Éireann, which so vitally informed the Peace Process on this island.  Yet those who try to retrieve that heritage are demonised as trouble-makers and worse.

War – ‘organised murder’ in the words of Harry Patch, last survivor of World War I – is not an answer; it is the problem, perpetuating a merciless cycle of aggression and retaliation.  It is also wasteful –‘a theft’ from true human priorities in the words of US President Eisenhower – and environmentally destructive.

Yet in 2015 our then Chief of Staff foresaw our defence forces as ‘an investment centre’[1].  Significant recent moves towards ‘defence-related research and investment’ were put on hold only by the calling of the General Election.

Smaller parties have now been invited to discuss government formation with the two large parties that have for decades undermined our defence and foreign policy values and thwarted the right and duty of the Irish people, under Article 6 of the Constitution, fundamentally to shape our society.

Commitments to the EU’s Permanent Structured Cooperation (PESCO) are incompatible with an adequate response to our needs in health, housing, education, climate change and other policy areas. We call on any party that enters into negotiations with FF/FG to demand a change in the policy of selling-out Irish neutrality, to bring neutrality into line with Article 29 of Bunreacht na Éireann and with the clearly expressed wishes of the majority of citizens (as confirmed in a Red C poll at the time of the 2019 European Parliament elections). If the parties do not squarely confront this issue, they will from the start have abandoned any serious prospect of achieving a decent, democratic, peaceful and sustainable society.

We should learn from the COVID-19 pandemic: only through international cooperation and not confrontation can global issues be solved. Indeed, by nations peacefully working together we can also prevent the next emergency that is hurtling towards us, climate change. Militarism and the ongoing arms race are a major contributory factor in the cause of climate change. The Stockholm International Peace Research Institute report that $1,917 billion was squandered on weaponry and other military expenditure in 2019. The Irish Government should become pro-active in pursuing an international peace agenda.

With this in mind, we, the undersigned, demand that the following become part of Government policy. 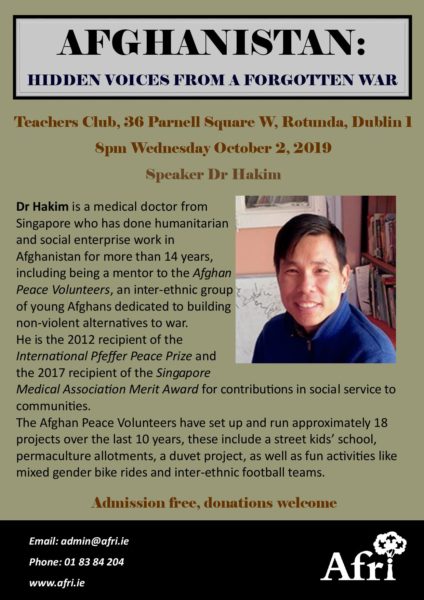